CHICO, Calif. - California State University, Chico canceled its limited number of in-person classes Monday and told students in an urgently toned message to vacate campus housing by the weekend after dozens of people tested positive for the coronavirus days after the fall semester started. 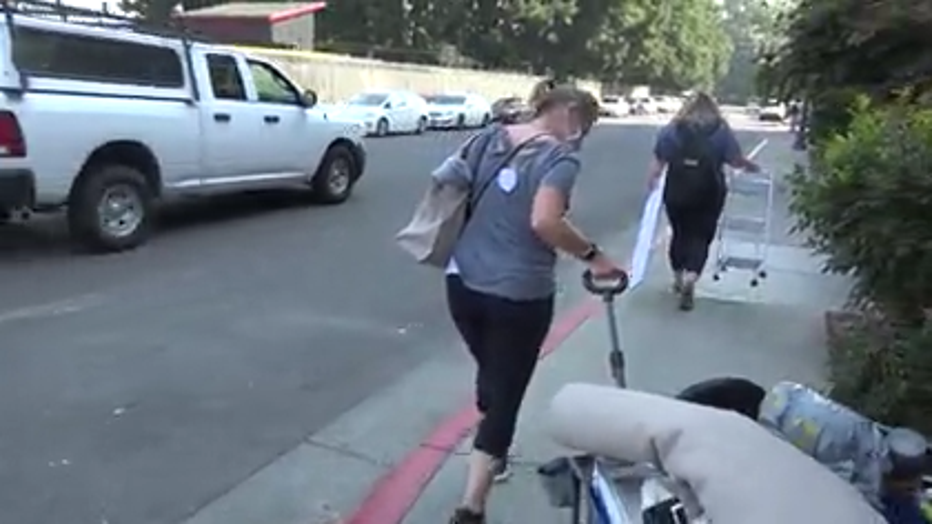 University President Gayle Hutchinson announced in a statement Sunday that the in-person classes it offered when the semester started last week will switch to virtual-only for the duration of the fall semester. She asked students to leave on-campus housing by the coming Sunday because nearly all on-campus residences have at least one positive case and “there is concern the numbers will only increase.”

“We understand the inconvenience of vacating campus housing so quickly, but Chico Sate’s residence halls have experienced rapid and alarming rates of COVID-19 cases,” Hutchinson said. “Simply put, we need students out of residence halls as quickly as possible for their own safety.”

University staff will help students secure alternate housing off-campus and students with no other housing options will be accommodated, she said. The university will provide prorated refunds for room and meal charges.

The fall semester started last week with about 10% of the university’s 4,200 classes taking place in person. The in-person sections were deemed essential for degree progress and included “clinical and field labs, performance and studio-arts classes, and capstone courses in engineering and agriculture,” the university said.

The latest incidents bring the total number of positive COVID-19 cases identified on the campus to 36 since the beginning of August, officials said.

The outbreak at Chico State is the latest to occur on a university campus as colleges around the country struggle to control outbreaks, prompting leaders in some college towns to raise alarms. Many campus outbreaks have been linked to parties and socializing at bars and fraternity and sorority houses.

Chico State, in the Northern California city of about 95,000 is 160 miles (255 kilometers) northeast of San Francisco. The university estimates that around 16,000 students are enrolled for the fall of 2020.

In the past week, outbreaks were reported at the University of Iowa and Illinois State University which both have had more than 500 positive test results since their fall semesters started in August. The University of North Carolina at Chapel Hill was one of the first to reverse in-person learning, sending students home to complete the semester remotely after the school had an outbreak a week into classes.

Like many campuses, Chico State was taking a variety of precautions to enable at least some students to live on campus. It limited university housing to single-room accommodations for about 750 students — roughly one-third of the typical occupancy, according to its website. Students were allowed to begin moving in on Aug. 17 ahead of the Aug 24 start of classes.

“Just three days into the semester, the University reported a troubling number of positive COVID-19 cases on campus,” Hutchinson said in her statement. It did not specify the cause of the outbreak but said cases spread quickly. Within days, the number of cases “ballooned to nearly 30, impacting both classrooms and a majority of on campus residence halls — with an even greater number of reported exposures that could have an exponential and devastating effect on campus.”

University officials did not immediately respond to questions seeking more clarity on the outbreak and the order for students to move off campus within a week.

The California State University system of 23 campuses is the nation’s largest four-year public university system, with 480,000 students. All its campuses are doing the vast majority of classes online, with only about 7% of courses like labs and other hands-on classes being taught in person, said spokesman Mike Uhlenkamp.

The University of California’s 10 campuses have taken a similar approach, starting with almost all classes online this fall while allowing some students to live on campuses in limited numbers.

At San Diego State University, which is part of the CSU system, more than 40 students and staff have tested positive since March, about half of them in the last two weeks. The university has now hired a private security firm to patrol on- and off-campus to look for students violating its COVID-19 policies.

The university said in a statement that officials have issued about 40 notices of possible violations to individuals and groups since Friday that will be investigated. “Consequences range from an official warning to, in extreme cases, expulsion,” the statement said.

Over the weekend, Dr. Deborah Birx, the White House coronavirus task force coordinator, advised college students not to return home if they test positive for the coronavirus.

“Please isolate at your college,” Birx said at a news conference. “Do not return home if you’re positive and spread the virus to your family, your aunts, your uncles, your grandparents.”