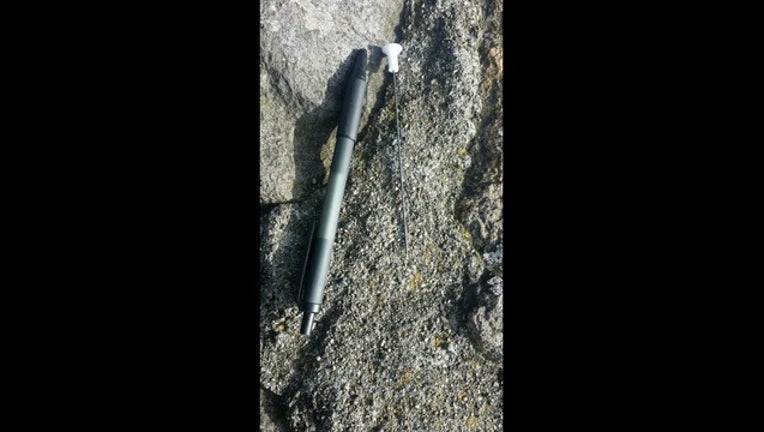 This is a photo of one of the darts that injured a pedestrian near the Golden Gate Bridge on Friday.

SAN FRANCISCO (KTVU) - At least two pedestrians were hit with long metal darks as they walked near the Vista Point parking lot near the Golden Gate Bridge on Friday afternoon, according to the California Highway Patrol.

A CHP officer, who was on bicycle patrol, said he was flagged down by a man at about 2:45 p.m.  The man reported that he had been struck in the thigh by a long, metal dart.  The dart had penetrated his jeans and his skin by 1-2 inches, the man said.  The officer called an ambulance as a precaution, and soon after, a woman approached who said that she, too, had been hit by a dart.  Like the man who was hit, the woman said she was walking north on the sidewalk near the Vista Point parking lot, on the Marin side of the bridge, when she was hit.  She said the dart went into one of her knee caps.  Both the woman and man were treated by paramedics at the scene, and then released.

The CHP says both darts have been booked into evidence and will be sent for testing to ensure they were not coated in any chemicals. Investigators are working with the Golden Gate Bridge District to ascertain if the crime was captured on surveillance video.

Detectives think that the individual responsible for shooting the darts was traveling across the span anytime between 2:00 and 2:30 p.m. on Friday.  The darts are approximately 5 inches long with one end sharpened to a fine point. The tail of the dart is topped with a white plastic cap which allows the dart to be fired from a blow gun.

We are asking anyone who may have seen this incident occurring to please contact the California Highway Patrol’s Marin Area Office by calling (415)924-1100.