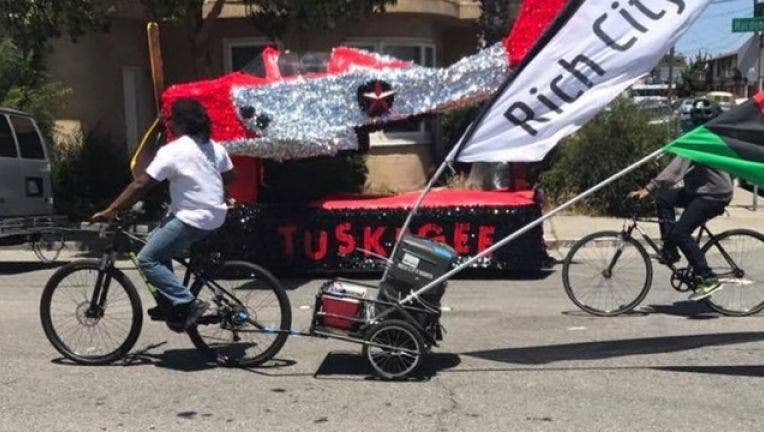 OAKLAND, Calif. - Oakland City Council members approved a settlement Tuesday with Richmond resident Najari Smith, who was stopped by police in 2018 for allegedly playing music too loud from a trailer attached to a bicycle he was on.

"The policing of Black joy," Smith said. "That needs to stop."

Police destroyed his bike and music trailer, he said.

Smith was stopped by police around 10 p.m. Aug. 3, 2018, at a
First Fridays event in Oakland as he and others were riding to honor Nia Wilson, who was stabbed to death in July 2018 allegedly by John Cowell, according to city prosecutors and a City Council resolution in Smith's case.

Smith alleged he was wrongfully detained and wrongfully arrested.
He also alleged police used excessive force against him and unlawfully towed his bicycle.

He spent at least a day in jail following the arrest but was not
charged for what he was taken into custody for, which was allegedly resisting arrest.

Smith is the founder and executive director of Rich City Rides in
Richmond, where his organization encourages bicycling as a healthy lifestyle choice and helps young people learn bicycle mechanics.

Richmond Mayor Tom Butt said in August 2018, "It looks like a case of bicycling while Black."

"He is widely respected throughout the Richmond community," Butt's letter said.

Before the vote Tuesday, Erin Bernstein with the Oakland City
Attorney's Office said about the settlement, "We don't have a comment at this time."