Anti-oil protesters glue themselves to Last Supper artwork in London

Protesters spray-painted the words "No New Oil" on an exhibition wall at the Royal Academy in London on July 5, 2022, before gluing themselves to a copy of Leonardo Da Vinci’s The Last Supper on display there. Credit: Just Stop Oil via Storyful

LONDON - Climate protesters have stormed art galleries across London in recent days in protest of the production and licensing of new fossil fuels, gluing their hands to the frame of a 200-year-old famous English painting, as well as a 15th-century copy of Leonardo da Vinci’s "The Last Supper."

On Tuesday, five protesters spray-painted the words "No New Oil" on an exhibition wall at the Royal Academy in London, where a copy of da Vinci’s "The Last Supper" is on display.

They then glued their hands to the frame of the painting, which was believed to have been completed in 1520 by Italian painter Giampietrino, a pupil of Da Vinci. The original "Last Supper" (ca. 1495-98) is inside the refectory of the Convent of Santa Maria delle Grazie in Milan, Italy.

The incident was organized by supporters of Just Stop Oil, a U.K. climate activist group that has been behind several recent protests — including a similar incident involving a Vincent van Gogh painting and another John Constable oil painting.

Footage shared by Just Stop Oil shows the protesters gathering at the painting. One man can be seen spraying the words "No New Oil" onto the wall beneath the painting as the other protesters sit down, hands glued to the frame. 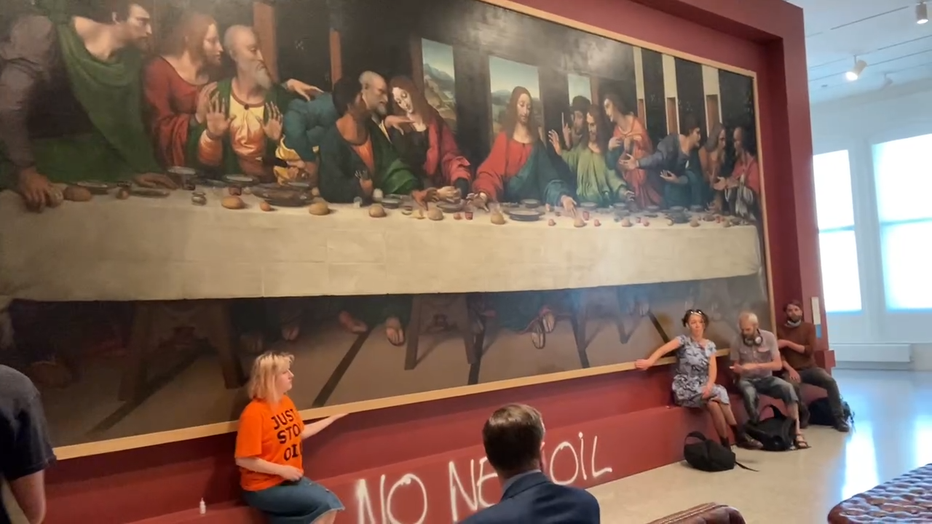 Just Stop Oil activists are seen with spray-painted the words “No New Oil” on an exhibition wall at the Royal Academy in London, where a copy of Da Vinci’s “The Last Supper (https://www.royalacademy.org.uk/art-artists/work-of-art/the-last-supper)“ is

A day prior, protesters also glued themselves to John Constable’s 1821 painting "The Hay Wain" at the National Gallery in London. They were later identified as Hannah Hunt, 23, and Eben Lazarus, 22, by Just Stop Oil.

During that incident, the pair also covered the painting with their own "reimagined version," calling for the government to end new oil and gas licenses and for art institutions "to join them in civil resistance," Just Stop Oil said in an accompanying statement.

Protesters at the National Gallery in London glued themselves to John Constable’s The Hay Wain on July 4, 2022, after covering the rural scene with a reimagined version showing how they said oil has destroyed the English countryside. Credit: Just Stop Oil via Storyful

"The disruption will end when the UK government makes a meaningful statement that it will end new oil and gas licenses," Hunt said in a press release.

The Hay Wain is regarded as one of Constable’s most famous paintings and among the most iconic pieces of British art. It depicts a rural scene, including a wooden wagon making its way across shallow water, on the River Stour in Suffolk.

"The reimagined version carries a nightmare scene that demonstrates how oil will destroy our countryside," the Just Stop Oil group said in a statement. "The river has gone, to be replaced by a road, airplanes fill the sky, pollution belches from cities on the horizon, trees are scorched by wildfires, an old car is dumped in front of the Mill and the famous Hay Wain cart carries an old washing machine."

The protesters were seen wearing white T-shirts with the slogan "Just Stop Oil" written across the front as each had a hand glued to the frame of the painting.

"I want to work in the arts, not disrupt them, but the situation we’re in means we must do everything non-violently possible to prevent the total collapse of our ordered society," Lazarus, a music student from Brighton, said in a statement. 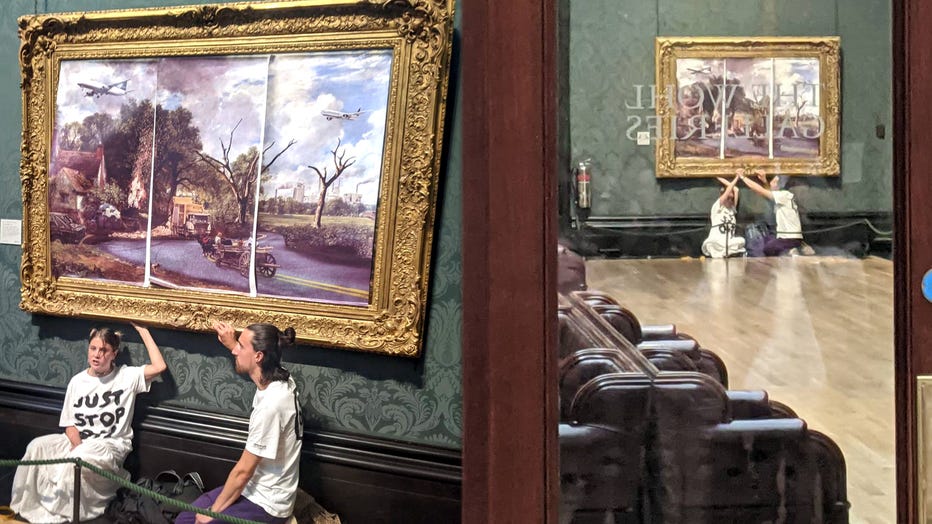 Hannah Hunt, 23, and Eben Lazarus, 22, of the U.K. climate activist group Just Stop Oil are pictured in front of the famous John Constable painting "The Hay Wain" at the National Gallery in London on July 4, 2022. (Credit: Just Stop Oil)

Lazarus and Hunt were later removed by police and arrested, according to the BBC.

The painting was also removed from the wall and examined by the National Gallery’s conservation team, who found it had minor damage to its frame and some "disruption to the surface of the varnish on the painting - both of which have now been successfully dealt with," gallery officials told the BBC.

Just Stop Oil has organized several other protests in recent months, including two other activists who similarly glued themselves last month to the frame of an 1889 Vincent van Gogh painting at The Courtauld Institute of Art in London.

"I’m sorry everybody. We don’t want to be doing this …. but we’re terrified for our future," one of the protesters can be heard saying in video footage of the June 30 incident.

Climate activists glue themselves to Van Gogh painting in London

Two climate activists glued themselves to the frame of a Vincent van Gogh painting at an art gallery in London, footage posted on June 30, 2022, showed. Credit: Just Stop Oil via Storyful

The painting, called "La Crau With Peach Trees in Blossom," was not damaged but the frame required treatment to remove glue residue, gallery officials said.

Over the weekend, five Just Stop Oil activists disrupted the 2022 British Grand Prix at Silverstone by invading the track and sitting down. The incident occurred during a halt in the race after an accident on the first lap, and the individuals were later removed by track officials.

In March, a Premier League soccer match was halted when a demonstrator tied himself to one of the goal posts in protest of new fossil fuel supply projects. The March 18 incident during the Everton vs. Newcastle United game caused the referee to stop play for nearly 10 minutes.