Long before ‘RuPaul’s Drag Race’, a notorious, legendary gender-bending theatre troupe, born in the aftermath of San Francisco’s Summer of Love, were way ahead of their time when it comes to performance rooted in drag.

SAN FRANCISCO - Long before ‘RuPaul’s Drag Race’, a notorious, legendary gender-bending theater troupe, born in the aftermath of San Francisco’s Summer of Love, were way ahead of their time when it comes to performance rooted in drag.

On Saturday Jan. 4 in San Francisco, a one-night only performance comes to San Francisco’s Victoria Theatre to commemorate The Cockettes.

Birdie-Bob Watt, assistant director and actor in ‘Cockettes Are Golden: A 50th Anniversary Celebration’, joined KTVU’s The 9 to talk about the mythical performers and what to expect this weekend.

“They were part of a commune system. They were responsible for entertainment. The entertainment was quite a revolution in costumes and makeup,” says Birdie-Bob. “They were loved in San Francisco. They used to perform at the Palace [Theatre] in the North Beach area.”

Birdie-Bob explains the troupe would hold court during that theater’s midnight movie screenings. 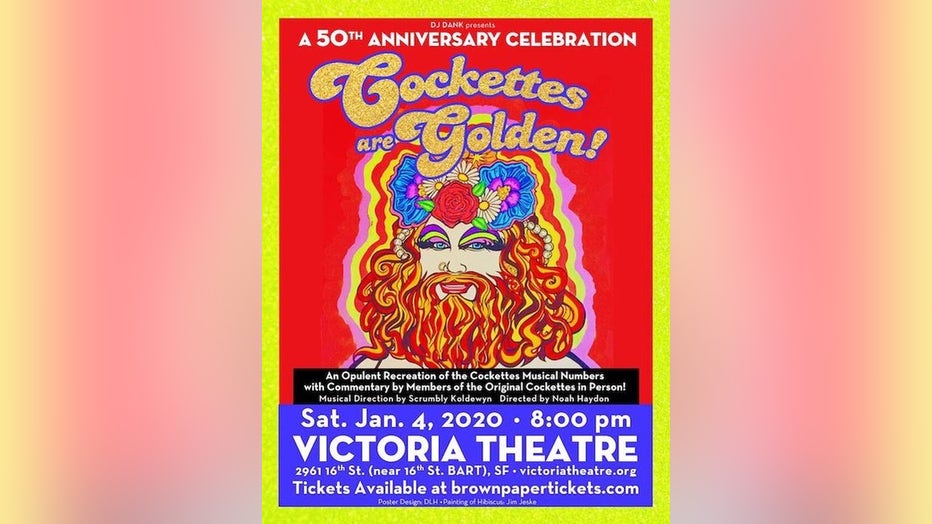 Poster for the 'Cockettes Are Golden: A 50th Anniversary Celebration.'

“Some movies back at that time, you couldn’t show in a regular theater as it were. Certainly, John Waters’ films and things of that notion were shown at that theater. The Cockettes would often do a performance in front of the curtain; kick lines and then they got more and more complex."

When they went on to New York City, film critic Rex Reed gave a positive review of their performance of their original production of ‘Tinsel Tarts in a Hot Coma’ in his nationally syndicated column. However, their overall reception in New York may have been misunderstood to say the least.

“There is that difference between the two coasts. There is the New York side and then there’s the Pacific Coast. Especially then.”

The 2002 documentary ‘The Cockettes’, by David Weissman and Bill Weber clearly depicts an audience, including Angela Lansbury, shocked at what they had just witnessed.

Birdie-Bob explains how at the time, the West Coast was all about the hippie mentality with things like the Haight-Ashbury scene, 1967’s Summer of Love and its precursor, the ‘Human Be-In’, a literal mass gathering of the counterculture, which opened the floodgates to psychedelia, often associated with free-thinking and drugs.

50 years ago, The Cockettes performance was very much about sex and drugs. But Birdie-Bob doesn’t like to dwell on the drugs.

“More than anything specific, it was really about releasing the self. If you like something you put it on. If you were already wearing a skirt, you found another skirt and you put that on top.”

Despite their influence, the troupe was short lived. Many of those who were involved went on to pursue other projects and adventures in the early 1970s.

The Cockettes are credited with having inspired the glitter and glam rock stylings of David Bowie, T-Rex, Elton John and New York Dolls among others.

“Some went to New York and worked in the cabaret. Some stayed here and continued doing music.”

Scrumbly Koldewyn, one of the original Cockettes, stayed in the area and continued on his musical path through various projects in San Francisco’s underground theater. Koldewyn is the musical director for Saturday night’s sold-out production.

As for the 50th anniversary celebration, you can expect the recreation of original Cockettes numbers, including 13 of the original Cockettes. There will be never-before-seen film footage of the troupe as well as short films specifically produced for the special one-night-only event.