The national coin shortage has been an unusual side effect of the pandemic. Among its victims? Retailers, laundromats and even the tooth fairy.

The Federal Reserve announced in June that the supply system for coins had been severely disrupted by the pandemic. While there are still enough coins out there, they aren’t circulating as freely because many businesses have been closed and consumers aren’t out spending as usual. 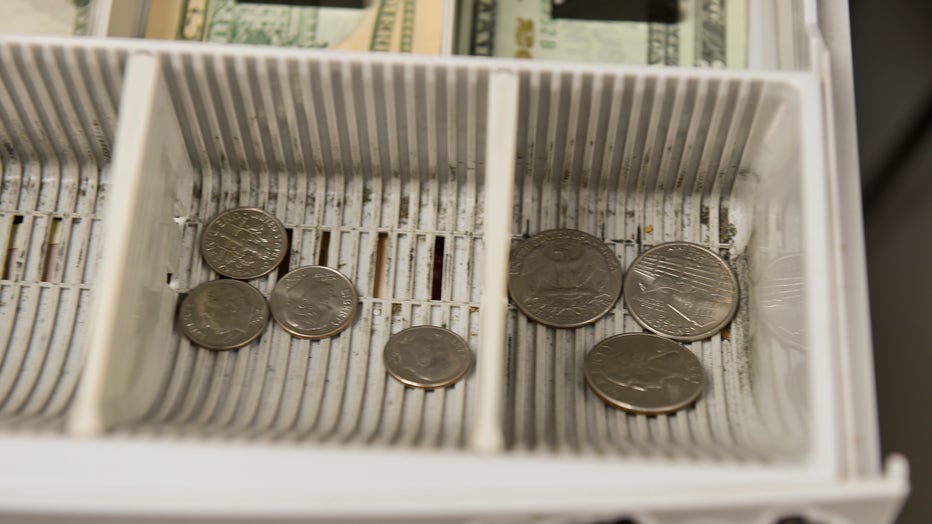 West Reading, PA - July 9: The detail photo of the change drawer of the cash register at Symbiote Collectibles in West Reading Thursday afternoon July 9, 2020. There is currently a coin shortage in the United States. (Ben Hasty/MediaNews Group/Reading Eagle via Getty Images)

The U.S. Mint and Treasury Secretary Steven Mnuchin have urged Americans to use coins or turn them in to banks to help for now. As the economy recovers and businesses reopen, the coin supply is expected to normalize.

In the meantime, people have have been forced to find workarounds.

Retailers large and small have urged shoppers to use cards or exact change whenever possible. Some won’t provide change. Grocery giant Kroger Co. is still accepting cash, but offers customers the option to load their change onto loyalty cards to use on their next visit or to donate the balance to charity.

Convenience store chain WaWa offered customers a free beverage at some of its stores if people brought in $5 worth of coins, or a sandwich for $50 or more. Community State Bank, a regional bank chain in Wisconsin, even offered a $5 bonus for every $100 worth of coins that people brought in. They had to suspend it after a week due to overwhelming response.

As the shortage persists, it’s become clear that there are still some conundrums that only coins can solve.

“It’s at the minimum an inconvenience...at worst it’s a business challenge,” said Brian Wallace, CEO of the Coin Laundry Association, a trade group for laundromats. “We provide a basic health service. People need to do their laundry.”

Laundromats rely on coins, in part, because many of its customers are unbanked or underbanked, meaning they are among the millions of Americans who rely solely on cash to pay for things.

Daryl Johnson, who owns Giant Wash Laundry — a chain of 11 laundromats in the Minneapolis area — said his company normally buys anywhere from $4,000 to $8,000 in quarters a week for its change machines. But after the Fed began rationing distributions of coins, his bank said it might not be able to provide any.

“Obviously we were freaking out a little bit,” he said.

Johnson got creative: he asked friends and family on Facebook if they had any change he could buy. He put up signs in stores asking customers to bring in their own coins and adjusted his change machines to only accept smaller bills to limit outflow. Meanwhile, he reached out to other laundry operators who might be willing to sell excess coins, even driving more than 4 hours to Omaha to buy $8,000 in quarters.

“It’s that or my businesses close,” he said.

Things have stabilized some, both for himself and his bank, in terms of supply. “I am not complaining because our business stayed open and everybody had a struggle, this just happened to be ours,” Johnson said.

People who rely on coin-operated laundry machines in laundromats and apartment buildings are struggling as well. Stephanie Sabin of Portland, Oregon has a washing machine at her apartment complex that only takes quarters. She bought four rolls of quarters in March. In mid June she bought two more. But in July, her neighborhood bank was closed for in-person business. The next five locations she tried were either closed or unable to give her quarters. She’s been able to get her laundry done with quarters her family had on hand or that she bought from her boss.

“Desperate times,” she said. “You can no longer request rolls of quarters at grocery stores or even get change back if you pay with cash at a food drive-thru.”

Toll booths, parking meters, vending machines and other spots that were once coin-heavy have largely modernized to accept other forms of payment. But pockets of problems still exist, such as at a gas station air pump or an do-it-yourself car wash.

Some people are finding themselves in need of change for other situations.

Leigh Ann Tognetti of Rio Grande City, Texas, had just started her 5-year old daughter on an allowance in July: two quarters for every day she picks up her room.

“It’s a lot of quarters to go through in a week,” she said. “I had no idea or even crossed my mind that there could be a coin shortage.”

To keep good on her promise, she has used change from the vending machine at work and coins mailed to her by a friend. She has also used a stack of dimes or doubles up two days’ payments with a dollar bill instead.

“If she would pick up every single day we would have a problem,” she said. “So far haven’t had to get too creative.”

In late July, the U.S. Mint asked Americans to do their part, urging the public to start spending their coins, depositing them, or exchanging them at banks or coin redemption kiosks. Mnuchin took to Twitter last week to urge the same.

For the North Carolina Aquarium at Pine Knoll Shores, a shutdown in March turned into an unexpected opportunity to help offset lost revenue and ended up helping address the coin shortage too .

The aquarium shut down its waterfall so it could clear out about 100 gallons of coins that visitors had thrown in over the past 14 years. The coins, which are still being washed and counted, will go towards operating costs.

“We are definitely feeling the pinch,” said Danielle Bolton, a spokeswoman for the aquarium. “Every penny counts, literally.”

The shortage is even being felt by the young.

Take Jen Vicker, of Bollingbrook, Ill. Her 10-year old daughter woke up with a loose tooth recently and worried the tooth fairy wouldn’t be able to pay because of the shortage, unaware her parents had a stash of coins set aside.

So she wrote a note: “Dear tooth fairy, you may already know this but there is a national coin shortage in America. You usually leave me dollar coins, but until this situation is resolved, I would like cash for my teeth. I apologize for the inconvenience.”