Colin Powell was a professional soldier for 35 years before becoming the first African American to serve as chairman of the Joint Chiefs of Staff and secretary of state.

WASHINGTON - Colin Powell, the influential former U.S. secretary of state who played a pivotal policy role during the George W. Bush administration, died Monday due to complications from COVID-19, his family said in a statement. He was 84.

Powell, the first African American to serve as chairman of the Joint Chiefs of Staff and secretary of state, had been fully vaccinated, according to a statement on Facebook. He had been receiving treatment at Walter Reed National Medical Center in Maryland.

Powell’s longtime aide Peggy Cifrino said he had been treated over the past few years for multiple myeloma, a blood cancer. The Powell family’s social media post did not address whether Powell had any underlying illnesses.

"General Colin L. Powell, former U.S. Secretary of State and Chairman of the Joint Chiefs of Staff, passed away this morning due to complications from Covid 19. He was fully vaccinated," the family statement reads. "We want to thank the medical staff at Walter Reed National Medical Center for their caring treatment. We have lost a remarkable and loving husband, father, grandfather and a great American."

Multiple myeloma impairs the body’s ability to fight infection, and studies have shown that those cancer patients don’t get as much protection from the COVID-19 vaccines as healthier people. 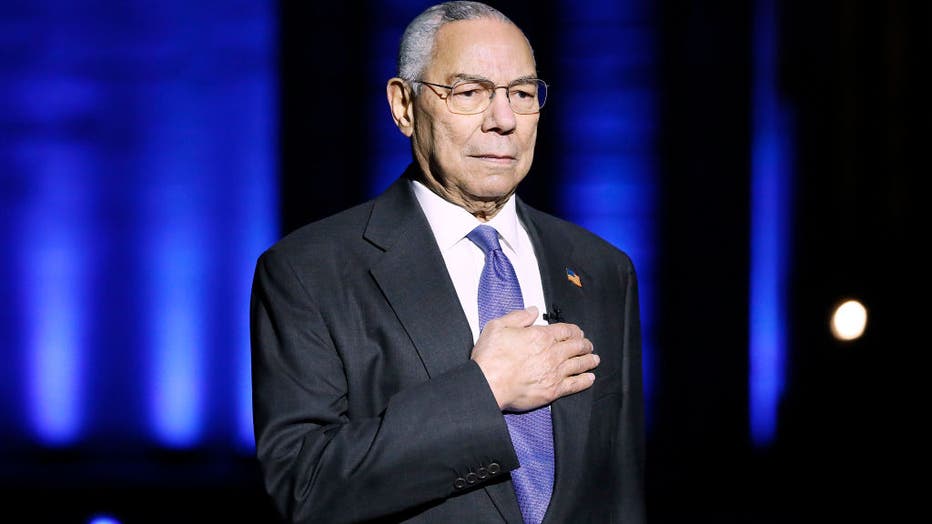 WASHINGTON, DC: In this image released on May 28, 2021, Gen. Colin Powell (Ret.) on stage during the Capital Concerts' "National Memorial Day Concert" in Washington, DC. (Photo by Paul Morigi/Getty Images for Capital Concerts)

Powell served Democratic and Republican presidents, including during the tumultuous years following the Sept. 11 terrorist attacks.

His sterling reputation suffered a painful setback when, in 2003, he went before the U.N. Security Council and made the case for the U.S. war against Iraq. He cited faulty information claiming Saddam Hussein had secretly stashed away weapons of mass destruction. Iraq’s claims that it had not represented "a web of lies," he told the world body.

President Joe Biden said in a statement that he and the first lady were "deeply saddened" by Powell’s death, noting the many years he worked closely with him during Biden’s time in the Senate.

"Over our many years working together – even in disagreement – Colin was always someone who gave you his best and treated you with respect," Biden’s statement reads in part. "Colin embodied the highest ideals of both warrior and diplomat. He was committed to our nation’s strength and security above all."

Secretary of State Antony Blinken delivers remarks after former secretary of state Colin Powell died Oct. 18, 2021, at the age of 84 from COVID-19 complications.

Born April 5, 1937, Powell was the son of two Jamaican immigrants and raised in the South Bronx. He attended City College of New York, where he began his military service by joining the Reserve Officer Training Corps (ROTC).

"Mine is the story of a black kid of no early promise from an immigrant family of limited means who was raised in the South Bronx," he wrote in his 1995 autobiography "My American Journey."

In 1989 he was promoted to the rank of general and was appointed by former President George H.W. Bush to the position of Chairman of the Joint Chiefs of Staff. Over four years, he oversaw several crises, including Operation Desert Storm in 1991.

He was appointed Secretary of State by former President George W. Bush in 2001 and served through 2005. His term was dominated by the challenges the Bush Administration faced after the Sept. 11, 2001, terrorist attacks.

Powell was the first American official to publicly lay the blame for the attacks on Osama bin Laden’s al-Qaida network. He made a lightning trip to Pakistan in October of 2001 to demand that then-Pakistani President Pervez Musharraf cooperate with the U.S. in going after the Afghanistan-based group, which also had a presence in Pakistan and where bin Laden was later killed.

As President George W. Bush’s first secretary of state, Powell led a State Department that was dubious of the military and intelligence communities’ conviction that Saddam Hussein possessed or was developing weapons of mass destruction. And yet, despite his reservations, he presented the administration’s case that Saddam indeed posed a major regional and global threat in a speech to the UN Security Council in the run-up to the war.

That speech, filled with his display of a vial of what he said could have been a biological weapon, was later derided as a low-point in Powell’s career, although he had removed some elements that he deemed to have been based on poor intelligence assessments.

Video from 2011 shows Powell addressing airmen and reporters in Texas. When asked to identify a key characteristic for effective leadership, without hesitation Powell answers, 'Trust.' Video Credit: DVIDS via Storyful

Bush said he and his wife, Laura, were also "deeply saddened" by the news of his passing.

"He was a great public servant" and "widely respected at home and abroad," Bush said in a statement. "And most important, Colin was a family man and a friend. Laura and I send Alma and their children our sincere condolences as they remember the life of a great man."

Throughout his career, Powell received numerous U.S. and foreign military awards and decorations.

His civilian awards include two Presidential Medals of Freedom, the President’s Citizens Medal, the Congressional Gold Medal, the Secretary of State Distinguished Service Medal, and the Secretary of Energy Distinguished Service Medal. Several schools and other institutions have been named in his honor and he holds honorary degrees from universities and colleges across the country.

Following his retirement, Secretary Powell wrote his best-selling autobiography, "My American Journey", which was published in 1995. Additionally, he pursued a career as a public speaker, addressing audiences across the country and abroad.