OAKLAND, Calif. - A Black Lives Matter tribute created by young people in an Oakland neighborhood was power-washed and partially removed on Tuesday by the city's public works department, prompting anger and disappointment from residents and triggering efforts to reestablish the display.

The tribute was a colorful chalk display, created by Anna Dubon, 20, and her sister, Leila, 14, along with friend Charlotte Low, 20. They put up the memorial last month, days after the police killing of George Floyd in Minneapolis. The chalk-work meandered up a set of stairs on what’s known as the Sunflower Path between Proctor and Modoc Avenues. On each step was written a name, including that of Floyd’s, Breonna Taylor, Ahmaud Arbery, Trayvon Martin, and dozens of other Black lives lost as a result of racial injustice.

On Tuesday morning, residents said a city worker from the public works department came out to the site and washed away the artwork.

Don Margolis said that he watched from his dining room window as a city truck arrived at the top of the stairs. He said a worker then got out with a hose "and in about 2 minutes erased the fruit of hours of effort by these dedicated young people."

Margolis went outside to ask the worker what was going on, and he was told that the city was called in to remove the chalk on a complaint about graffiti at the location.

Other neighbors told KTVU that the worker was not able to remove all of the memorial display because the hose he was using was not long enough. So he promptly left after power-washing only part of it. Many said they didn't blame the worker for coming out and doing his job, but rather was upset that someone in the neighborhood would complain about the artwork. 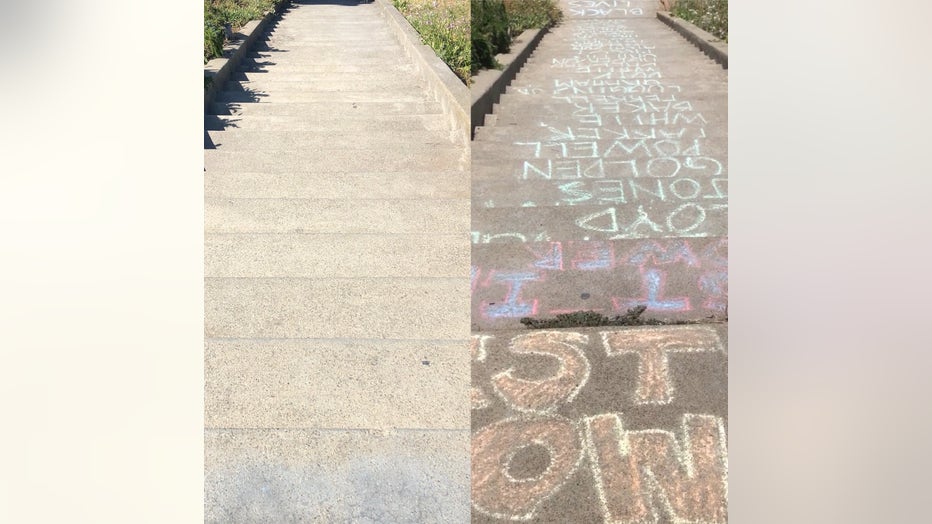 The city removed a Black Lives Matter tribute in Oakland on July 7, 2020, after receiving a complaint of graffiti. Oakland officials later apologized, saying the city made a mistake.

Many residents expressed deep disappointment about the action, with some suggesting plans not only to revive the artwork but to make sure it remained on display.

Julie Weisenberger proposed the community rewrite the names along the path and then have a member of the neighborhood “adopt” each step, with the responsibility of checking on the adopted step every day, and rewriting the designated name on it, if it were to get erased again.

"It's a small gesture, but would show a united front,” Weisenberger said. She told KTVU that the memorial has meant a great deal to her, as she’s been unable to take part in recent protests calling for an end to police brutality and racial injustice. "I have a severely disabled daughter at home and don't want to expose her to Covid - so it's been frustrating to not be able to get out and participate,” she explained. "If we can do this one little thing, I think it will show how united we are around this - in a time of ridiculous and unnecessary talk of division."

Julie Walker, another resident of the neighborhood, said that once she learned of the removal of the display, she promptly reached out to the city, inquiring about obtaining a permit to protect the chalk-work by deeming it as street art.

Community members previously rallied behind efforts to protect the stairway tribute. Last month, not long after the display went up, it was a target of graffiti, which prompted residents of the neighborhood to come together for a vigil, fundraiser, and moment of silence.

On June 18, people from the neighborhood gathered at the tribute site in a show of solidarity, to walk up the steps, reading each name, as they showed up with signs and messages of their own.

The defacing of the tribute also prompted Margolis to pen a letter to his neighbors. In an email, he expressed his frustration. "Free speech happens even at the neighborhood level. Across the street from my house, at and about the steps leading from Proctor to Modoc, are chalked messages announcing that Black Lives Matter, and memorializing the names of victims of violence."

He went on to write, "Thuggery also happens at the neighborhood level.  Some person or group seems to think it appropriate to deface messages and remove signs,” Margolis continued, "Don't get me wrong -- those who disagree with the Black Lives Matter message have a right to express their views, and to the protection of that right… BUT YOU DO NOT HAVE THE RIGHT TO SILENCE OTHERS' EXPRESSION. LEAVE THE OTHER MESSAGES ALONE. If you are defacing the BLM messages, or removing signs, you are acting undemocratically. This is thuggery.”

Late Tuesday, the city responded to an inquiry by KTVU, acknowledging the power washing effort was in response to a complaint of graffiti it received on July 3. Oakland Public Works spokesman Sean Maher said the action was taken as normal response to a complaint that’s entered into the system, but he also acknowledged that during this sensitive time, the city would need to reconsider its policies.

"We recognize that our community is expressing itself at this time about issues that are both hugely important and deeply personal, in ways that require us to adapt our approach to public maintenance,” Maher said in an email to KTVU. "We are evaluating now changes to how we approach complaints about writing or markings on the public right of way that touch on these issues and do not include abusive language. One example we are considering is shrines, which are public expressions allowed to remain in the right of way for a period of time before being abated.”

City Councilman Dan Kalb also reacted and reached out KTVU, saying the city should not have removed the chalk-work. He said he himself had visited the tribute site and that actions were now being taken aimed at protecting such expressions that have been created by members of the community.

"The chalked names of African Americans killed by law enforcement absolutely is an appropriate display of the Black Lives Matter message and movement,” he wrote in an email. "The City made a mistake and I am deeply sorry this happened. I’ve urged our Public Works Dept. to adjust their case evaluation to make sure this doesn’t happen again."

For many, while efforts to remove the names of the Black lives lost to senseless brutality were hurtful and disappointing, it did not dampen the spirit of hope generated by their neighborhood tribute.

"The display on the stairs is a symbol of what is happening in our country,” Yoshii said. "Youth are speaking out about the truths they are observing and experiencing, they are unafraid to demand justice and use the tools they have available to do something about it,” she added.

For Margolis, he described the display that has been created outside his home as uplifting. "What resonates particularly with me is that children in the neighborhood appear to have spearheaded the effort to honor Black victims of police violence,” he said, adding that the recent events in America have been reminiscent of life-altering moments that he lived through when he was only a child -- including the assassinations of Martin Luther King Jr. and Robert F. Kennedy.

The Oakland resident said, "I hope and believe that the sad events of today -- woefully similar to those of 1968 in many ways -- will remain with these children and instill a lifelong dedication and activism focused on improving their world.”

Residents react after a public works employee power-washed the display following a complaint of graffiti.