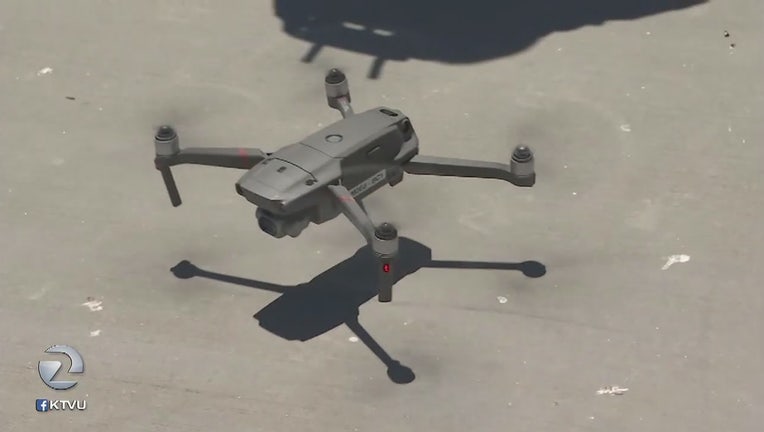 CONCORD, Calif. - The Concord City Council unanimously approved a police request for a drone program this week over the protests of residents who cited concerns over privacy and that the $30,000 of seed money for the program comes from Marathon Petroleum.

The Concord Police Department cited examples of when waiting for an unmanned aerial system (UAS) from a neighboring jurisdiction could've had serious consequences, including this month when a 6-year-old autistic child went missing at Newhall Community Park. Concord police called for drone help but discovered the boy before the drone's 25-minute estimated time of arrival.

Concord Police Chief Mark Bustillos said the city is too big not to have its own drones, which would also help free up officers in a department that's understaffed.

"We're doing the best we can with what we have," Bustillos told the council.

After some people complained about Marathon's environmental record and possible influence it could exert over the department, Bustillos said it was his idea that the oil company's grant go toward a drone program.

The program would be managed by a program coordinator chosen by Bustillos. The department is asking for five drones from Airworx Unmanned Solutions, of the same types used by neighboring agencies.

A staff report said the department has tracked suspects, including an armed man wanted for attempted homicide in February of this year. The drone was able to identify the man was armed with an assault rifle and assisted officers in making the arrest.

Drones have also been used to track suspects through areas not easily accessed by police vehicles. They were also used to track protesters during Black Lives Matter events in 2020.

The drone footage will be kept for two years, the same time as for police body camera footage and city correspondence. Police will keep a public log of how and when it uses drones on its website.

A staff report said the UAS program will not be used to conduct random surveillance, or carry weapons, or target people based solely on actual or perceived characteristics. Police said drones won't be used "to harass, intimidate, or discriminate against any individual or group" or "in a reckless or negligent manner."

The council asked the Police Department to come back three months after the program starts to provide an update. The department still needs to buy the equipment and train in its operation.