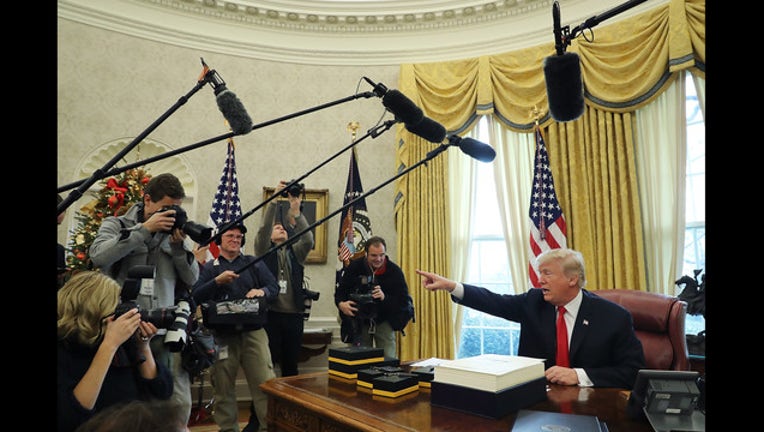 CASTRO VALLEY, Calif. - A Bay Area Congressman on Monday introduced the first bill of its kind to make it a federal crime to physically attack journalists reporting the news.

Rep. Eric Swalwell (D-Castro Valley) said that the "Journalist Protection Act" was developed as a direct result of the “climate of extreme hostility to the press” created by President Donald Trump.

The president has described mainstream media outlets as “a stain on America,” “trying to take away our history and our heritage,” and “the enemy of the American People.” Trump even tweeted a GIF video of himself body-slamming a person with the CNN logo superimposed on that person’s face, and retweeted a cartoon of a “Trump Train” running over a person with a CNN logo as its head.

“Such antagonistic communications help encourage others to think, regardless of their views, that violence against people engaged in journalism is more acceptable,” Swalwell said – and obviously it’s not.

Some recent attacks on journalists include last March, when OC Weekly reporters say they were assaulted by demonstrators at a Make America Great Again rally in Huntington Beach, Calif.
In August, a reporter was punched in the face for filming anti-racism counter-protestors in Charlottesville, Va. And in September, a Joplin, Mo. blogger was similarly attacked for his providing information about the community.

There were at least 44 attacks on journalists in the United States in 2017, according to The NewsGuild.

“Not all attacks on journalists this year have been committed by Trump supporters, but the fact remains that rhetoric emanating from the world’s most powerful office is stoking an environment in which these attacks proliferate,” Swalwell said. “We must send a loud, clear message that such violence won’t be tolerated.”

The bill, the first of its kind according to Swalwell’s office, would allow the federal government some power to make an arrest following a physical attack on a journalist if state and local authorities decide not to. The Journalist Protection Act would formally make it a federal crime to intentionally cause bodily injury to a journalist affecting interstate or foreign commerce in the course of reporting or in a manner designed to intimidate him or her from news gathering for a media organization. The punishment could be fines or imprisonment up to six years.

The bill does not address verbal attacks on the media or “Fake News” tirades against journalists.