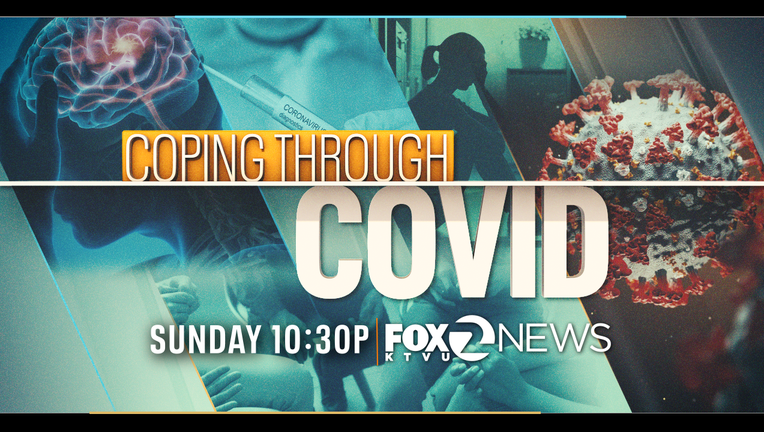 As the coronavirus pandemic stretches on, many people are feeling the effects of the stress, anxiety and uncertainty on their mental health. Even if you haven't lost a loved one to COVID-19, or fallen ill yourself, it is almost certain you are still feeling the stress of a changed world.

Everyone reacts differently to stress, but the data point to a nation on edge.

According to the CDC, 40% of people are suffering from at least one mental health or behavioral issue, including depression, anxiety, PTSD, or substance abuse.

That number is three to four times higher than levels reported just one year ago.

If you need help, here are some Bay Area resources:

Depression and anxiety exist on a scale, and it’s tipping in the more serious direction for many during the pandemic.

When Li Li Clever became unemployed and notified that she’d be evicted all within 24 hours, she said her depression took a turn for the worse.

“As somebody who's battled anxiety and depression for a lifetime, in and out of therapy and whatnot, it really started to push me over the edge,” Clever said. “And so, I felt extremely despondent and hopeless.”

She hadn’t been able to see friends due to the shelter-in-place, and felt incredibly alone.

“I mean, had my own business for 25 years, lived alone for 30, just didn't need anything from anyone,” she said. “And all of a sudden, I was like, ‘Help!’ And I just remember saying out loud to the sky, whoever, whatever is listening. Just, you take this, it's too big. I can't handle it anymore.”

She got help, in the form of a neighbor opening up a room in his house to her. And other neighbors from the site Nextdoor left groceries on her doorstep. Feeling supported helped her get through to the other side, she said.

Clever’s advice to people, as someone who had recently overcome her “darkest hour” is: “don't listen to it. It's there. I know, it's a chemical thing, as well as a circumstantial event that's going on. But there's a much larger reality at play. And there is so much to look forward to around the corner, but you have to be open to it.”

Dealing with the unusual holiday season

An expert helps you deal with the unusual holiday season.

Gema Tim, a wedding planner, said that the flow of her life--which used to include frequent travel to consult clients for their weddings--has been disrupted, and it’s taken a toll on her mental health.

“I really felt like there was just this heavy weight and I couldn't get up out of bed, and I would just stay there for like 15 hours in the day,” Tim said. “I wouldn’t shower, I wouldn't want to get up, or do anything or I felt like it was too much energy to send a text message back to a friend.”

She said that speaking with her therapist, and establishing a daily schedule helped her immensely. And she was frank with friends who checked in on her about her state.

Tim is Filipino and said that she thinks Asian immigrant families have a difficult time speaking about mental health.

She said that she has found it constructive, and even empowering, to speak candidly about her mental health with members of her community, including her church.

“I just would like to encourage anybody struggling, and just remind them that they're not alone,” Tim said. “And most of all, that there are so many resources.”

Showing gratitude during the pandemic

A scientist from the Greater Good Center says showing gratitude during the pandemic can help.

KTVU spoke with a family therapist to get a sense of the difficulties families and marriages are facing, as well as pertinent advice.

“I can certainly say that in the past six months or so if not longer… we've had a ton of people coming into the office with elevated anxiety, elevated rates of depression,” Jabir Tarin, who works as a therapist and family counselor said. “Overall, marital happiness is struggling tremendously.”

He pointed to a recent University of Chicago study which reported that a slim 14% of people feel happy in their marriages. That figure is compared to 30% before the pandemic--which means that there was a decline by over 50% in happiness.

“While those numbers are really concerning, more concerning than that, is that between 70 to 85% of couples, essentially are unhappy in their marriages,” he said. “Just in general, that's eight out of 10 couples are unhappy.”

He said that many people who had their relationships on the back-burner are now faced with their dissatisfaction on a near-daily basis, as more people spend time at home.

Tarin noted that life during the pandemic has a way of eating away at people while making them feel like they can’t take care of themselves, or catch a break.

“There's this inability to allow for healthy self care and healthy healing, even amongst those really interpersonal relationships between husband and wife,” he said. “So, as a result, you find that because you're ending up spending so much extra time with one another, little things in behavior become nuanced, they start to get frustrating, they start to cause snickering.”

He said that people should take a step back and meditate on whether they’re having genuine problems in their marriage, which many are, or the weight of the pandemic is causing strife.

For those with either issue, he has some advice: consider boundaries.

“It's really important to start to establish boundaries, healthy boundaries, whether it's within the home, whether it's within your schedule,” he said. “…creating a schedule where, maybe when you come home or on the days off, you allocate a little bit of individual time for the other partner to have their time as well. Additionally, having routine and scheduling for yourself, like you would normally throughout the week.”

He also noted that, for many who work from home, areas within the home now have more fluid purposes--and that can be negative. Try not to make your bed a work space, and be mindful about how you use the spaces in your home to avoid conflict, and feeling claustrophobic.

“Instead of using all those spaces, you use them for what they are, and you have your one allocated spot in the home for work,” he recommended. “And so therefore, throughout the day, when you have time to go to those other places, it will actually be a relief as opposed to just reminding you about work.”

Tarin also noted that divorce filings have increased in numbers, as have reports of domestic violence.

For those who are considering divorce, he recommended connecting with family and friends about the decision, so you don’t feel alone. If that’s not an option, he recommended speaking to a therapist or counselor.

Lee Davis, a union electrician and board member of the Alameda County mental health advisory board, said that it might be a scary time for people who are experiencing mental illness, but that it’s important to know that there are resources.

“It's like a Stephen King, kind of dystopian playbook,” she said of the pandemic. “I mean, deadly virus, inept politician, social unrest, trying to raise your children at home. I mean, these are things that the healthiest person has a hard time dealing with.”

She said that the population her board focuses on are those with more severe mental illness, who might be experiencing delusions. Davis said that if you have a family member in this category, who may themselves not be able to recognize that they are will, the Family and Intercultural Resource Center can connect them with resources.

Additionally, her board is there as a resource.

Psychologist Brenda Schaeffer said coping with alcohol and eating too much is common during the pandemic. And she offers some tips.

Davis said that she intimately understands what it’s like to be ill and not realize it. She has bipolar disorder and has made it through periods of psychosis after hospitalization and rehabilitation.

“There's a condition called anosognosia, which means that you don't understand that you're ill and certainly was the place that I was in,” she said.

Family members of people who are experiencing symptoms of mental illness should be patient, she said.

“I would say of family members and friends, to try to keep in mind that the person is experiencing something totally different than you can see from the outside,” she said. “And if you're vilified in different ways, to try to understand that. It's not personal; that is a very commonplace thing for somebody that is experiencing bipolar disorder--to think that their family members and friends are evil or bad.”

Pandemic affects our mental health in ways we may not expect, says San Francisco Department of Health Jenee Johnson.

Persistence is key when helping loved ones, she noted. But inadequate community and mental health resources don’t make it any easier to deal with mental illness for individuals, and on a societal level.

“To have people cycling in and out of the ER, and John George mental hospital and Santa Rita jail---Santa Rita jail, 36% of the population has a mental illness,” she said. “And that's just wrong. And we can do better. We can do better to have upfront spending on mental health infrastructure.”

She said that she believes investing in housing for folks would also help many people struggling with mental illness.

“It would absolutely change the game; you wouldn't be having to step over people having a psychotic episode on the street,” she said. “It would just be a different situation, if we did that investment up front. It's possible for things to be different.”

Use of prescription medication for mental health

The use of medications during the pandemic has risen dramatically. Dr. Christina Iglesia discusses.

If you or someone you know needs help, here are some Bay Area resources: