Dr. Sarah Fortune, chair of the Department of Immunology and Infectious Diseases at the Harvard T.H. Chan School of Public Health, discusses superspreaders and their role in transmitting COVID-19.

WASHINGTON - More than 1 million people have recovered from the novel coronavirus in the United States, a milestone overshadowed by an increase in COVID-19 deaths and cases in states across the country.

COVID-19 has infected more than 3.3 million and killed at least 135,000 people in the U.S., according to July 13 data from Johns Hopkins University. Florida reported 15,299 cases on Sunday, shattering the national record for a state’s largest single-day increase in new confirmed cases.

RELATED: ‘A test is not a passport to party’: Mayor Eric Garcetti says gatherings remain prohibited in LA

Deaths from the virus have been rising in the U.S., especially in the South and West, though they are still well below the heights hit in April, according to a recent Associated Press analysis of data from Johns Hopkins.

A coronavirus death, when it occurs, typically comes several weeks after a person is first infected. Experts predicted states that saw increases in cases and hospitalizations would, at some point, see deaths rise too — which is now happening.

Florida suffered a record-breaking week with 514 fatalities reported — an average of 73 per day. Three weeks ago, the state was averaging 30 deaths per day.

RELATED: COVID-19 deaths take a long-expected turn for the worse

Researchers expect the number to continue rising for at least some weeks, but think the count probably will not go up as dramatically as it did in the spring because of increased testing, among other factors.

“I really do think we could control this, and it’s the human element that is so critical. It should be an effort of our country. We should be pulling together when we’re in a crisis, and we’re definitely not doing it,” said University of Florida epidemiologist Dr. Cindy Prins.

Adm. Brett Giroir, a member of the White House coronavirus task force, called mask-wearing in public, which has been met with resistance in some U.S. states, “absolutely essential.” 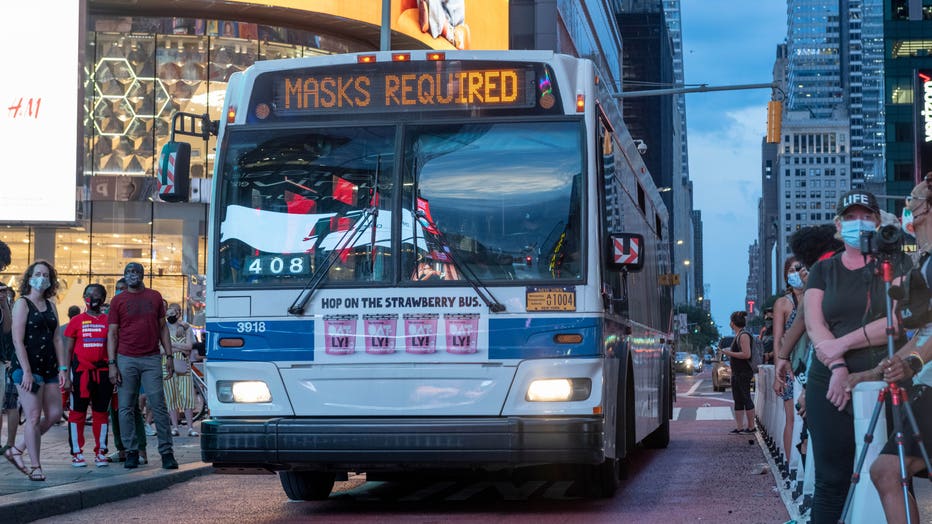 A sign on the front of a bus reads, "Masks required" in Times Square as the city moves into Phase 3 of re-opening following restrictions imposed to curb the coronavirus pandemic on July 12, 2020 in New York City. (Photo by Alexi Rosenfeld/Getty Image

Giroir, the assistant secretary at the Health and Human Services Department, told ABC’s “This Week” on Sunday that “if we don’t have that, we will not get control of the virus.’’

President Donald Trump wore a mask in public for the first time Saturday during a visit to a military hospital, something Democratic House Speaker Nancy Pelosi said Sunday showed he has “crossed a bridge.”

The president was a latecomer to wearing a mask during the pandemic, declining to wear a mask at news conferences, coronavirus task force updates, rallies and other public events. People close to him have told The Associated Press that the president feared a mask would make him look weak and was concerned that it shifted focus to the public health crisis rather than the economic recovery.

More COVID-19 deaths were reported in Florida and Texas over the span of a month than total deaths caused by hurricanes over a span of 20 years, a stark reminder that the pandemic is not over.

In other parts of the world, the number of infections has been rising dramatically in India, South Africa and Brazil, whose virus-denying president has tested positive.

India, which has the most confirmed virus cases after the United States and Brazil, on Monday reported a record daily surge of 28,701 new cases reported in the past 24 hours. Authorities in several cities are reinstating strict lockdowns after attempting to loosen things up to revive an ailing economy.