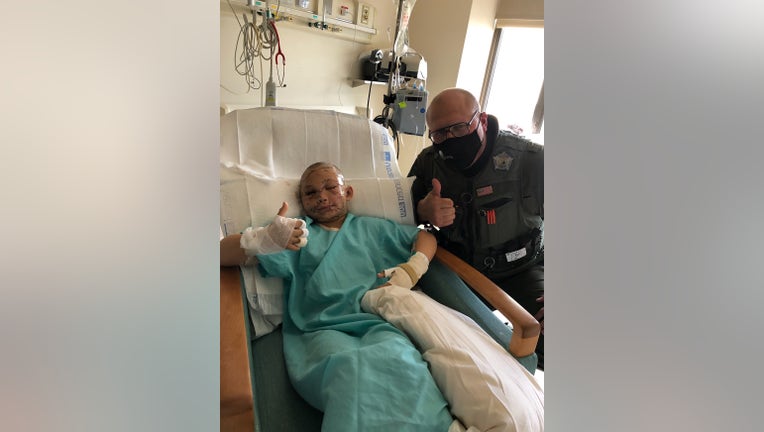 Lily A. Kryzhanivskyy, 9, seen here with WDFW Sgt. Tony Leonetti, was recovering after a cougar attacked the child while she played hide and seek at a camp in Washington state on Saturday, May 28, 2022.  (Washington Department of Fish and Wildlife)

SPOKANE, Wash - A cougar attacked a 9-year-old girl who was playing hide-and-seek at a church camp in Washington state, seriously wounding her and sending her friends running in fear.

The attack happened while Lily A. Kryzhanivskyy and two other children were playing in the woods Saturday at the camp near the small town of Fruitland, northwest of Spokane. Lily jumped out to surprise her friends when the cougar suddenly attacked, the Washington Department of Fish and Wildlife (WDFW) said.

Adults rushed to help and found the girl covered in blood. She was airlifted to a hospital, where she had surgery for multiple wounds to her head and upper body.

Lily was released from the intensive care unit Monday and remained hospitalized in stable condition, the department said Tuesday.

The child's mother told fish and wildlife officials that her daughter's recovery so far has been "amazing" and conveyed the message from Lily that she was "very brave and tough" in the face of the attack, the department said.

Following the attack, adults staying at the church camp found the young male cougar and killed it.

Officials said tests completed over the weekend showed the animal did not have rabies. Wildlife officers were at the camp throughout the weekend combing through the scene, the department said.

"We are extremely thankful for this little girl’s resiliency, and we’re impressed with her spunk in the face of this unfortunate encounter," Fish and Wildlife Police Capt. Mike Sprecher said. "It happened fast, and we are thankful that the adults at the camp responded so quickly."

"In this instance, this little girl did nothing wrong," said Fish and Wildlife spokeswoman Staci Lehman. "It happened so quickly, and there’s nothing she could have done to prevent it."

In California, there have been three fatal attacks on humans since 1986. The figures from the California Department of Fish and Wildlife showed there were another 18 verified attacks which were non-fatal. The most recent happened this month in Trinity County, leaving a 24-year-old woman injured. The woman's dog suffered major injuries, including a skull fracture, when the pet faced off with the mountain lion in an attempt to defend her owner.

The cougar, also known as a mountain lion, is the second-largest cat in the Americas after the jaguar. Secretive and largely solitary by nature, cougars are rarely seen in daylight. The ambush predator eats deer and smaller animals. While cougars generally avoid people, attacks on humans have increased in North America as more people enter cougar habitat.

If attacked by a cougar, you should yell at the animal and try to make yourself look bigger, she said. If it attacks, stay on your feet and fight back.

"Do not turn around. Don’t take your eyes off the animal," Lehman added. "Don’t run."