LUBBOCK, Texas - A Texas couple headed for a vacation in Las Vegas discovered a sneaky stowaway in their luggage — their pet Chihuahua Icky.

When Jared and Kristi Owens checked their luggage in, they noticed it was a few pounds heavier — forcing them to pay extra for an overweight carry-on charge.

They decided to do some reorganizing in order to redistribute the weight between their luggage when they were met with their adorable pooch snuggled up in their clothes.

RELATED: The cat’s out of the bag: Airport security stops couple after pet cat sneaks into carry-on luggage

Jared said one of the Southwest Airlines employees helped them open the bag and then, "BOOM, there’s our Icky coming out of one of my boots I packed."

"We were dumbfounded and flat shocked and embarrassed, to be honest. She loves to burrow in our laundry baskets, closet, blankets, wherever she can get nice, warm and comfy, and on that day, I guess she chose our suitcase we had left open with clothes in it for hours," Jared said. 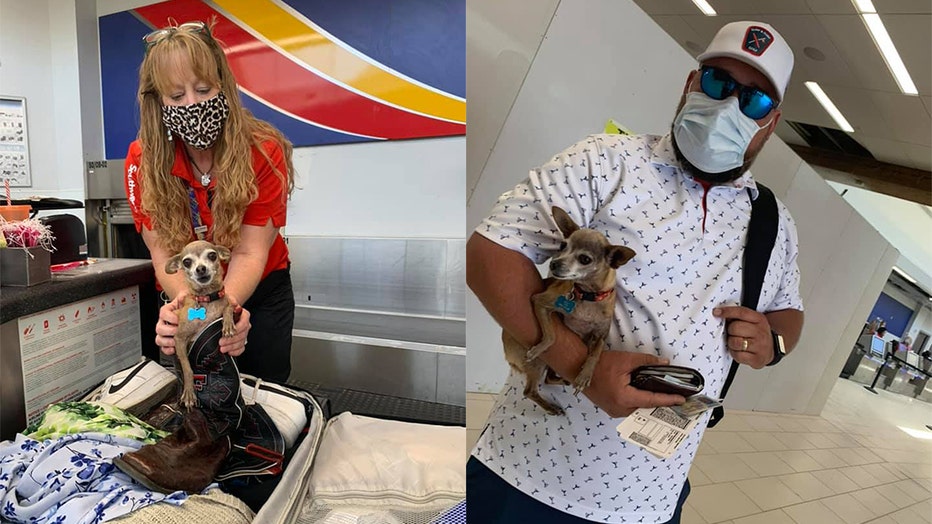 Jared Owens photographed with his dog Icky after she was discovered in his luggage at the airport.

Before boarding their flight and making arrangements for their uninvited guest to be returned home safely, they had to take photos.

Icky can be seen pictured halfway in Jared’s leather boot, caught with a guilty look on her face.

With the spare time they had, the couple called some family friends to pick Icky up so they could have a peaceful vacation in Las Vegas.

"We planned this trip last minute to get away from the daily hustle and bustle of three dogs, a rabbit and several fish as well as two crazy, beautiful little girls," Jared said.

Because someone was watching over the house while they would be away, Jared said he didn’t think to do a thorough sweep of the residence before their departure.

But Jared was grateful they were able to find Icky before boarding their plane.