More than 700,000 people have died from COVID-19 across the world, a grim milestone that reflects nations’ ongoing struggles in containing the spread of the novel coronavirus months into the pandemic.

COVID-19 case counts continue to surge in different parts of the country, including Southern states like Texas and Florida, which each reported over 400,000 confirmed cases as of Aug. 3. New York, though, is the state with the highest number of COVID-19 deaths with over 32,000, according to Johns Hopkins.

A national ensemble forecast from the U.S. Centers for Disease Control and Prevention predicted that weekly reports of new COVID-19 deaths may increase over August “with 5,000 to 11,000 new deaths reported during the week ending August 22.”

As of Aug. 3, Brazil, Mexico and the United Kingdom were trailing the U.S. with the next-most confirmed COVID-19 deaths.

Brazil is the country with the second-highest number of COVID-19 deaths with over 94,000 as of Aug. 3, according to Johns Hopkins data. The country had been previously criticized for its slow approach to acknowledging and addressing the COVID-19 pandemic. Jair Bolsonaro, president of the country, tested positive for COVID-19, although he announced on Twitter he had tested negative on July 25.

Mexico now has the third most COVID-19 deaths in the world, behind Brazil and the United States. 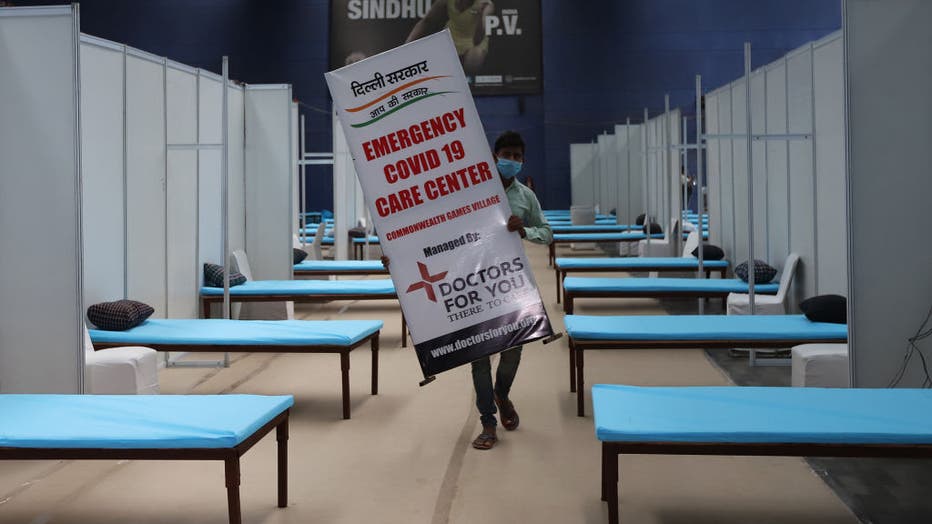 Workers prepare a makeshift COVID-19 care center at the Commonwealth Games Village Sports Complex with a capacity of five hundred people as the numbers of COVID-19 cases rise in New Delhi. (Photo by Amarjeet Kumar Singh/SOPA Images/LightRocket via Ge

The United Kingdom has over 46,000 COVID-19 deaths and more than 300,000 confirmed cases, according to Johns Hopkins, making it the country with the fourth-highest number of coronavirus deaths.

In late July, British Prime Minister Boris Johnson put some of the country's next steps out of lockdown on hold Friday with just a few hours' notice, saying the number of new coronavirus cases was on the rise for the first time since May.

The government’s top medical adviser warned that it was impossible to fully reopen society without the virus running out of control.

South Africa, meanwhile, surpassed 500,000 confirmed coronavirus cases, but President Cyril Ramaphosa said Sunday he sees “promising signs” that the rapid growth of cases has stabilized and that the country’s strained health system is managing to cope.

Globally, the World Health Organization said that 259,848 new infections were reported Saturday, its highest one-day tally yet. India, which has now confirmed more than 1 million infections, on Sunday reported a 24-hour record of 38,902 new cases.

Pope Francis said “the pandemic is showing no sign of stopping” and urged compassion for those whose suffering during the outbreak has been worsened by conflicts.In Europe, where infections are far below their peak but local outbreaks are causing concern, leaders of the 27-nation European Union haggled in Brussels over a proposed 1.85 trillion-euro ($2.1 trillion) EU budget and coronavirus recovery fund.

German Chancellor Angela Merkel said there is “a lot of good will, but there are also a lot of positions” in the talks, which have laid bare divisions about how the countries hit hardest by the pandemic, such as Italy and Spain, should be helped. She said the talks, which were initially scheduled to end on Saturday, could still end without a deal.

While there is no COVID-19 vaccine as of yet, the phase 3 clinical trial of a vaccine developed by Moderna and the National Institutes of Health began in late July. Moderna’s vaccine had previously been reported to produce COVID-19 antibodies in all participants in a trial.

According to the New York Times’ Coronavirus Vaccine Tracker, there are six vaccines in the large-scale efficacy test and 12 that are in expanded safety trials.

While previous projections as to when a COVID-19 vaccine may be available ranged from 12 to 18 months, Dr. Anthony Fauci recently said that he is confident that a coronavirus vaccine will be ready by early 2021.