STURGIS, S.D. - The number of COVID-19 cases in South Dakota increased nearly four-fold over a span of two weeks, according to data collected by the U.S. Centers for Disease Control and Prevention.

On Aug. 20 alone, new COVID-19 cases in South Dakota topped 300 for the first time in over six months. Hospitalizations — currently at 125 — have roughly tripled in the last two weeks, according to the state’s Department of Health.

"COVID-19 case spikes are following a national trend being experienced in every state, not just South Dakota," according to a health department spokesperson. 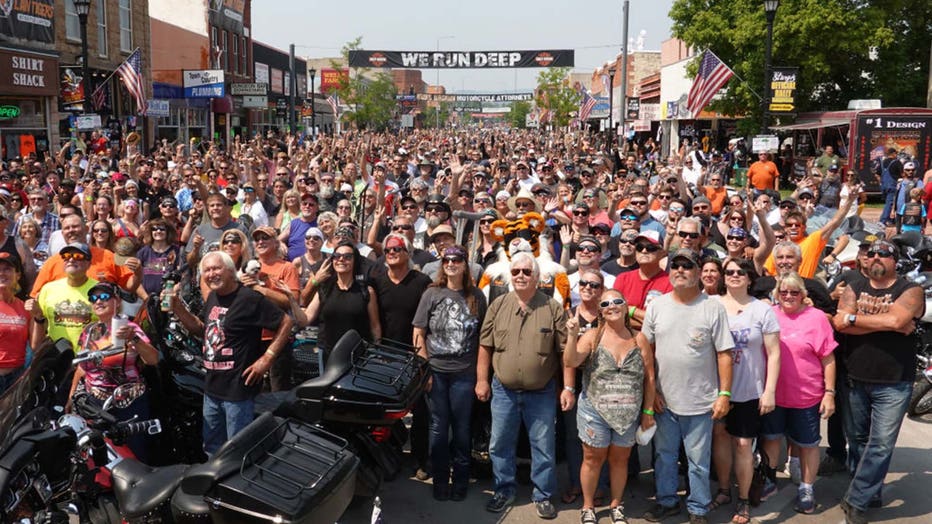 About 56% of people eligible for a vaccine have completed their immunization, health officials reported.

Meanwhile, news of the recent spike in COVID-19 cases comes on the heels of the Sturgis Motorcycle Rally, which drew hundreds of thousands of motorcycle enthusiasts to the state beginning on Aug. 6.

The rally is known as a place where people let loose, strolling the streets in minimal attire and body painting. On Aug. 5, one woman walked through downtown with a goat on a leash. A man sat on a bench with a rifle as passersby smiled and nodded.

"It’s in the back of your mind, you think about it a little bit," said Aaron Harper. The Nebraska resident has not received a vaccine yet, but said he intends to. "But you’ve got to live your life and enjoy it and have fun still."

Last year’s rally transformed Sturgis, usually a quiet community of under 7,000 residents, into a travel hub comparable to a major U.S. city. One analysis of anonymous cellphone data found that well over half of the counties in the country were visited by someone who attended Sturgis.

Despite the massive number of unmasked attendees at this year’s rally, state health department officials told FOX TV Stations, so far, only 39 new cases have been directly linked to the event.

RELATED: Many major insurers no longer waiving out of pocket costs for COVID-19 care

Nationwide, COVID-19 deaths are running at more than 1,100 a day, the highest level since mid-March, and new cases per day are averaging over 152,000, turning the clock back to the end of January. As of early this week, the number of people in the hospital with the coronavirus was around 85,000, a level not seen since early February.

The surge is largely fueled by the highly contagious delta variant among people who are unvaccinated. In areas where vaccination rates are particularly low, doctors have pleaded with their communities to get inoculated to spare overburdened hospitals.

Amid the alarm over the delta variant in the past several weeks, the slump in demand for COVID-19 shots reversed course. The number of vaccinations dispensed per day has climbed around 80% over the past month to an average of about 900,000.

White House COVID-19 coordinator Jeff Zients said Tuesday that in Alabama, Arkansas, Louisiana and Mississippi, "more people got their first shots in the past month than in the prior two months combined."

Also, millions of students are being required to wear masks. A growing number of employers are demanding their workers get the vaccine after the federal government gave Pfizer's shot full approval earlier this week. And cities like New York and New Orleans are insisting people get vaccinated if they want to eat at a restaurant.

Half of American workers are in favor of vaccine requirements at their workplaces, according to a new poll from The Associated Press-NORC Center for Public Affairs Research.