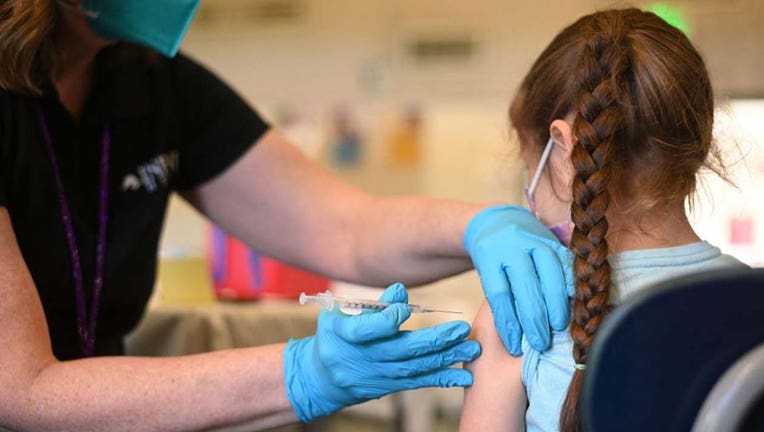 FILE - A nurse administers a pediatric dose of the COVID-19 vaccine to a girl.

SAN FRANCISCO - San Francisco's rate of new COVID-19 cases is outpacing all other Bay Area counties as well as most of the state, according to local and state health data.

The city is confirming an average of around 13 new cases per day per 100,000 residents as of March 29, the most recent date for which complete data is available.

Likewise, many of the state's largest counties including Los Angeles, Sacramento and Fresno are tracking even lower at 5.5 cases per 100,000 or fewer.

The San Francisco Department of Public Health said in a statement that even amid the uptick, cases are not increasing at rates similar to the winter surge tied to the highly contagious omicron variant.

In addition, DPH officials said, just 20 patients are currently hospitalized with COVID, down from a pandemic peak of 286 during the omicron surge and equivalent with pre-omicron levels.

"As one of the densest cities in California, we know viruses may spread more quickly within San Francisco," the Department of Public Health said. "Additionally, our robust testing infrastructure has allowed us to identify and report new cases and deploy resources in response."

Even with the recent rise in cases, San Francisco has not seen a commensurate rise in COVID-related deaths, reporting only 12 in March compared to 72 in February and 70 in January.

DPH officials said they expect a continuation of low hospitalization and severe disease figures among those who are up to date on their recommended vaccinations even if the city sees a future surge of cases tied to the BA.2 subvariant of omicron, which has driven a recent spike in the United Kingdom.

In a statement on the subvariant released in February, officials with the World Health Organization said that while BA.2 may be more transmissible than the main omicron variant, the gap between the two is not as wide as the difference in virulence between omicron and the delta variant.

Research is ongoing regarding how potent the subvariant is or the risk of reinfection it may present.

San Francisco public health officials said residents can take steps to prepare for the potential spread of the BA.2 variant by completing their initial vaccination series and getting a booster dose when eligible and by having a stock of rapid COVID tests and high-quality masks.

As of Tuesday, 83% of all San Francisco residents have completed their initial vaccination series, while an additional 6% have received at least one dose.

Of those who have received their initial vaccine series, two-thirds have also received a booster dose to fortify their immune response to the virus.

"While COVID-19 will remain with us for the foreseeable future, we have many tools to slow the spread of the virus and prevent severe illness," the DPH said.