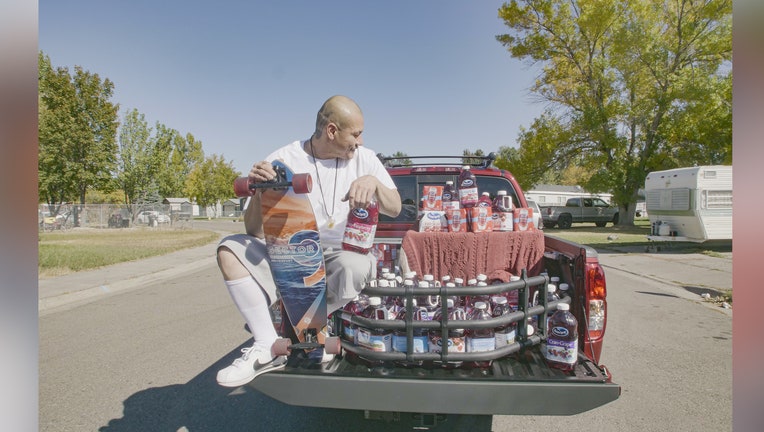 Nathan Apodaca with his new truck and cranberry juice gifted by Ocean Spray.

A former Idaho potato farmer who found fame on TikTok was gifted a brand new truck from the makers of his favorite drink: Ocean Spray Cranberry Juice.

Nathan Apodaca, also known as “DoggFace,” 37, of Idaho Falls, went viral after he posted a video of himself skateboarding and listening to Fleetwood Mac’s “Dreams” while enjoying a bottle of cranberry juice in September.

The TikTok video garnered more than 27 million views and even helped Fleetwood Mac’s “Dreams” reach 29 on the music charts, according to Apodaca’s website.

The popular 70s band even retweeted the video, saying, “We love this!”

Apodaca had been skateboarding back and forth from work after his car broke down, but still managed to keep his spirits up in his TikTok videos.

Once Ocean Spray got word that Apodaca didn’t have a reliable mode of transportation, the company decided to help him out.

“When we saw Nathan Apodaca’s video and the joy it created, we knew we needed to celebrate him and join in this movement of spreading good vibes worldwide. Ocean Spray was humbled to gift Nathan with a surprise truck we knew he needed. It’s been an incredible ride and we hope he loves his new wheels,” according to a statement from Tom Hayes, president & CEO of Ocean Spray.

“I was given an awesome surprise yesterday – a brand new set of wheels from Ocean Spray! The truck is cranberry red and the back was filled to the top with my favorite Cran-Raspberry juice,” Apodaca said in an emailed statement.

It was also mentioned on Apodaca’s website that his fans “changed his life” by generously donating $15,000 to help him and his two teenage daughters.

“It’s been a wild ride for sure and I feel humbled to be putting out these good vibes for everyone right now,” Apodaca said.