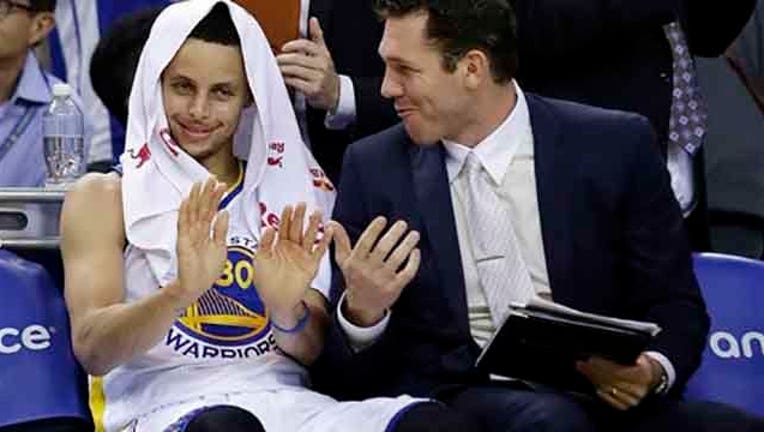 Curry missed 12 of his first 13 shots from the floor and was 0 for 7 from 3-point range before making back-to-back shots from beyond the arc in the third quarter. He finished 4 for 17.

Marreese Speights had 13 points off the bench, while Leandro Barbosa scored 12 for Golden State. The Warriors improved to 55-13, the second-most wins in team history and four shy of the franchise record.

The Warriors were also short-handed as All-Star Klay Thompson sat out his second straight game with a sprained right ankle.

Even with Thompson sidelined and Curry struggling on one of his worst shooting nights of the season, Golden State eased to its 10th straight win over New Orleans.

Coming off 114-95 win over NBA-leading Atlanta on Wednesday, the Warriors led by as much as 27 and forced the Pelicans into 21 turnovers.

Barnes filled some of the scoring void, helping Golden State pull away in the second quarter before Curry warmed up late in the third.

He missed his first seven shots beyond the arc before hitting a deep 3-pointer with 2:36 left that extended Golden State's lead to 75-64. Curry later sank another trey to make it 86-66.

New Orleans, which began the night one game behind Oklahoma City in the race for eighth place in the West, couldn't overcome their injury problems.

Davis missed his second consecutive game with a left ankle injury he suffered during a shootaround before Thursday's loss to the Phoenix Suns. The Pelicans also were without Omer Asik, Ryan Anderson and Jrue Holiday.

Speights made a buzzer-beating 3-pointer at the end of the first quarter to put the Warriors up 29-26, then Barnes helped Golden State pull away in the second. He made a step-back 3-pointer to push the Warriors' lead to 10, then closed out the period with a three-point play and a 9-foot bank shot that made it 53-42 at halftime.

Pelicans: Asik was a late scratch due to a calf injury. Tyreke Evans went down with an apparent hip injury midway through the third.

Warriors: Golden State upped its NBA-best record at home to 32-2. ... Thompson isn't expected back until Monday the earliest.