MILL VALLEY, Calif. - Today, CVS, the nation's largest chain of pharmacies, began vaccinating people in 11 states according to each state's and county's priorities.

We were lucky to meet up with some of the first folks to sign up online reacted and the enormity of what CVS, just one pharmacy of several, intends to do.

Expect the nationwide vaccination plan to speed up sooner than later.

Leslie and Tom Holmes of Mill Valley were among the lucky vaccine hunters to get an appointment for their first dose of the Moderna vaccine at CVS.

"So, we were lucky to get this one because I think they get all filled really fast," said Leslie Holmes. "We kept looking. Of course, my son drove us nuts by too by after us all the time, keep checking, keep checking."

"This popped up and we took it," said Tom Holmes. "Psychologically I feel greatly relieved," said Eric Christensen, a retired, TV news and sports producer, relentlessly manned his computer for a CVS appointment who also said, "I must have been one of the first because I had a choice of many times to come here. So, the early bird got the vaccine." 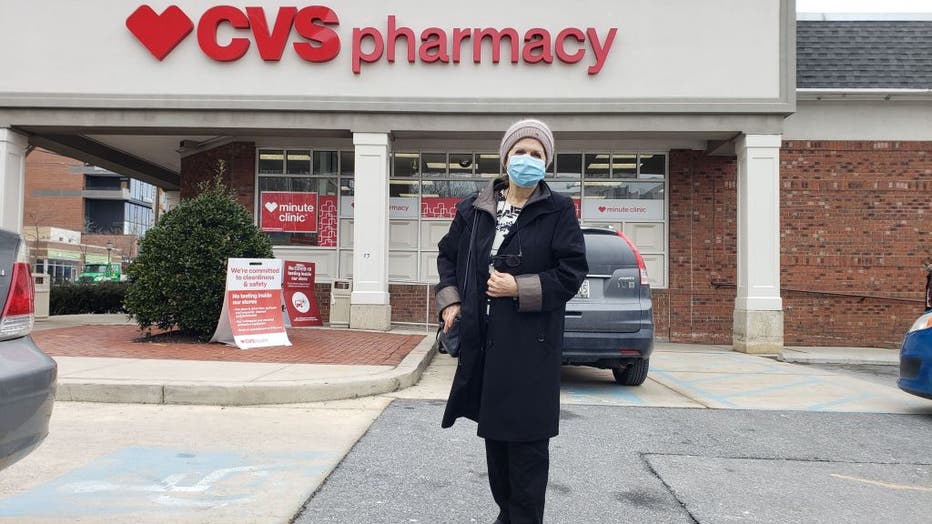 Tahmineh Mirmirani, 81, poses outside a CVS pharmacy in Bethesda, Maryland, on February 12, 2021, after being one of the first to receive a Covid-19 vaccine as part of a federal partnership with pharmacies. - For some, it represents the chance to spe

Pharmacist Lisa Kalajian is CVS District Leader over a large part of California. "We are guaranteeing that any patient who has registered is guaranteed their vaccination" said Kalajian.

Kalajian said to start things off, besides California, CVS started vaccinations in ten other states. Of the 250,000 doses CVS will receive each week for all eleven states, 82,000 a week will come to California.

Of the 353 CVS pharmacies giving vaccinations, 120 are in California. But, again, that's just for starters. "Our goal is to be absolutely nationwide in as many stores as we can," said Kalajian.

With supplies coming direct from the federal government, the CVS ramp up will be huge.

Because most pharmacy chains and independents will get doses as well, be calm and careful. "I'm looking forward to getting out a little bit but not letting my guard down," said Mr. Holmes. "I'll still wear a mask. I still do social distancing. But ,I just feel a lot more safe," said Mr. Christensen.

CVS and all the others know, this is the real return pathway to normalcy.