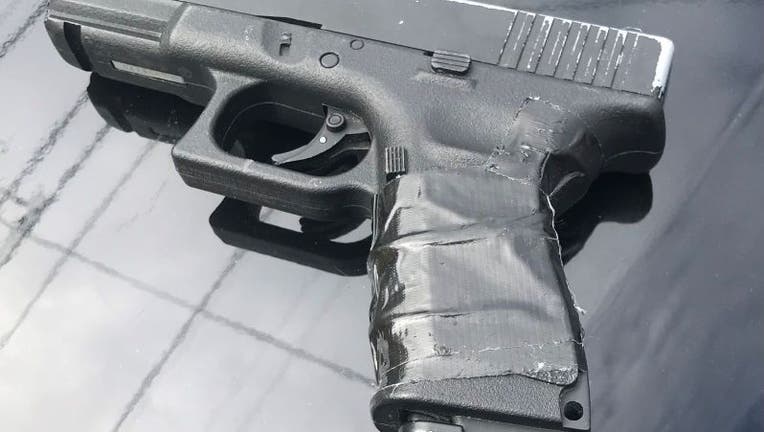 Daly City police issue photo of a fake gun they say a man they shot and killed was in possession of.

On Tuesday, the D.A.'s office said police struggled with Roger Cornelius Allen, 44, a San Francisco resident, over what turned out to be a fake gun.

A news release, from D.A. Steve Wagstaffe's office offfered more details from the shooting. It said police came upon a truck with a damaged rear tire on the 700 block of Niantic Avenue last Wednesday at just before 2 p.m.

The vehicle had three occupants; the driver, a woman in the backseat and Allen, who was in the front passenger seat.

The DA said an officer approached the driver and made contact about possibly needing assistance. A second offficer joined the first. The driver was cooperative and got out of the vehicle.

Two additional officers arrived and stood on the vehicle's passenger side where the door was ajar. One of the officers said they noticed what appeared to be a gun on Allen's lap.

Officers yelled out that there was a gun to alert the others. One of the offficers grabbed Allen's hand and the gun when a struggle ensued. Police said the barrel of the fake gun was pointed in the direction of the officer on the driver's side. Also mentioned was an unidentified small object that struck the officer on the driver's side in the forehead, causing minor abrasion.

The D.A.'s office points out that Daly City police officers are not equipped with body cameras. In addition, they said there is no video evidence from this shooting. It is not clear why police dash cameras did not record this incident.

San Mateo County District Attorney's office is investigating. The office said their investigation of the shooting will last about two months. Police have not yet released the names of the four officers involved.

In an update on Wednesday, Daly City Assistant City Manager Stephen Stolte issued a statement on behalf of the city that in part read, "The City is not releasing the identity of the involved officers at this time, as this case is under active investigation."