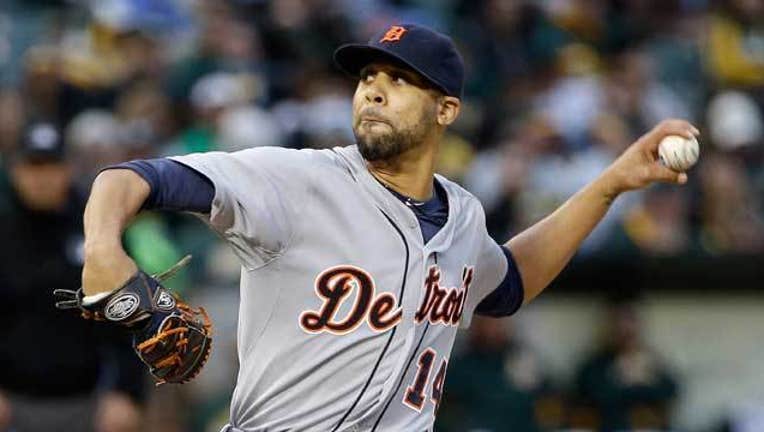 OAKLAND, Calif. (AP) — David Price outdueled Jesse Chavez to win for the first time in four starts, and the Detroit Tigers bounced back from a shutout a day earlier to beat the Oakland Athletics 1-0 on Tuesday night.

Price (4-1) gave up five hits, struck out three and walked one in seven innings for a third straight winning decision, but his first victory since May 2 at Kansas City.

Former A's outfielder Rajai Davis hit a sacrifice fly in the first against Chavez (1-5). Slugger Miguel Cabrera returned to the Tigers lineup after sitting out Monday and extended his hitting streak to 13 games with a ninth-inning single.

Plate umpire Jeff Kellogg took a ball in the mask in the ninth but stayed in the game after being checked, and then a fan ran onto the field to cause another delay.

The A's had baserunners in each of the first five innings and runners in scoring position with fewer than two outs in four of those, but couldn't capitalize. They missed a chance in the eighth, too.

After Ben Zobrist's one-out double in the fifth, Price retired his final eight batters. Joba Chamberlain got two outs in the eighth, Tom Gorzelanny entered and allowed Stephen Vogt's infield single, and then Joakim Soria got the final four outs for his 14th save in 15 opportunities.

Soria retired pinch-hitter Josh Reddick on a comebacker to end the eighth, and then gave up Sam Fuld's two-out double before finishing the ninth.

Detroit slugger Yoenis Cespedes singled in the seventh for his first hit of the series against his former club. He was then thrown out trying to steal second.

Oakland had won a season-high three in a row. The A's also picked up their majors-leading 50th error on backup catcher Josh Phegley's first-inning throw a day after a trio of miscues by the defense.

Chavez lost his second straight start and third consecutive decision dating to a win at Minnesota on May 5. He dropped to 0-4 in 10 career appearances and three starts against the Tigers. He had no chance of following up Jesse Hahn's four-hitter in a 4-0 win Monday with no support.

Anthony Gose led off the game with a single, stole second and advanced on Phegley's error. Davis' sacrifice fly was the first run surrendered by Chavez in the first or second innings all season. He moved into the rotation April 23.

Stephen Vogt played first base to give him a break from his regular catching rigors as A's manager Bob Melvin rested second baseman Eric Sogard and right fielder Reddick for most of the night.

Tigers: RHP Justin Verlander, who hasn't pitched in 2015 because of a strained triceps, threw a 4 1/3-inning simulated game and hopes the next step is a rehab start as long as he feels good a day later. "All in all very pleased. I'm very optimistic I'm going to feel great tomorrow," Verlander said.

Athletics: 2B Zobrist played for the first time since April 24 a day after coming off the DL from left knee surgery. ... LHP Sean Doolittle was activated from the 15-day disabled list after being sidelined with a shoulder injury. He will not move back into the closer role right away. "He is a difference-maker," Melvin said.