WASHINGTON - President Joe Biden on Monday criticized GOP lawmakers for not wanting to raise the country’s debt ceiling during a news conference at the White House. The president’s remarks came as the country quickly approached its limit on federal borrowing and lawmakers clashed over items on his legislative agenda.

"Raising the debt limit comes down to paying what we already owe," Biden said. "The United States is a nation that pays its bills and always has."

Biden blamed Republicans for their "reckless" spending during the Trump administration, putting the country in need of raising the debt limit.

He also called GOP lawmakers "hypocritical" for raising the debt ceiling during the Trump administration but refusing to do so now.

Biden added that it may fall squarely on Democrats’ shoulders to raise the debt limit.

"So be it," he continued. "But they [GOP} need to stop playing Russian roulette with the U.S. economy."

The U.S. has never defaulted on its debts in the modern era and historically, both parties have voted to raise the limit. Treasury Secretary Janet Yellen has said that if the current $28.4 trillion cap is not raised by Oct. 18, the U.S. probably will face a financial crisis and economic recession.

Raising or suspending the debt limit allows the federal government to pay obligations already incurred. It does not authorize new spending. The president said raising the debt ceiling would allow the country to pay for social security for seniors, salaries for military service members and benefits for veterans.

Biden warned if the debt ceiling isn’t raised, the country’s credit rating would be downgraded and interest rates could rise for mortgages and credit cards.

House Democrats voted in September to suspend the debt limit through the end of 2022. But Republican senators say Biden and the Democrats in power should go it alone as they also try to move on a multitrillion-dollar package of tax increases on the wealthy and new spending on children, health care, infrastructure and the environment.

"Well, I hope Republicans won't be so irresponsible as to refuse to raise the debt limit and to filibuster the debt limit," Biden said Saturday before leaving the White House. "That would be totally unconscionable. Never been done before, and so I hope that won't happen." 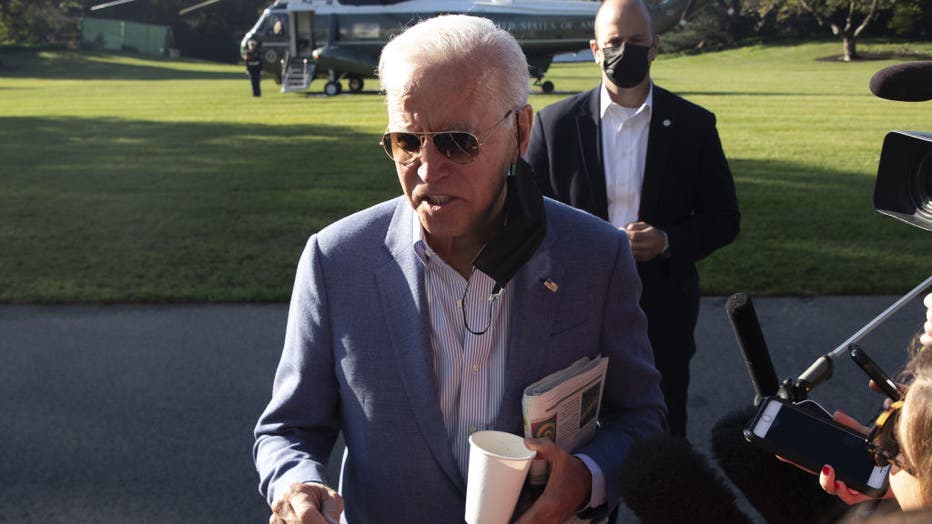 President Joe Biden speaks to members of the media before boarding Marine One on the South Lawn of the White House in Washington, D.C., on Oct. 2, 2021. Photographer: Michael Reynolds/EPA/Bloomberg via Getty Images

Republican leader Mitch McConnell of Kentucky has argued that Democrats should pass a debt limit extension with the same budgetary tools they are using to try to pass the $3.5 trillion effort to expand social safety net programs and tackle climate change. He reiterated that warning as the Senate opened on Thursday, even as Democrats have labeled that option a "nonstarter."

Lawmakers have raised or suspended the debt limit nearly 80 times since 1960. Democrats joined the Republican Senate majority in doing so three times during Donald Trump’s presidency.

Last week, Biden signed legislation to avoid a partial federal shutdown and keep the government funded through Dec. 3. Democrats wanted to take care of both priorities, including the looming debt limit issue, in one bill — but Senate Republicans blocked that effort last week.

The House approved the short-term funding measure by a 254-175 vote not long after Senate passage in a 65-35 vote. A large majority of Republicans in both chambers voted against it.

The arguments made in both chambers about the debt ceiling have followed similar themes.

"You are more interested in punishing Democrats than preserving our credit and that is something I’m having a real tough time getting my head around," House Rules Committee Chairman Jim McGovern, D-Mass., told Republicans. "The idea of not paying bills just because we don’t like (Biden’s) policies is the wrong way to go."

Undaunted, Republicans argued that Democrats have chosen to ram through their political priorities on their own and thus are responsible for raising the debt limit on their own.

"So long as the Democratic majority continues to insist on spending money hand over fist, Republicans will refuse to help them lift the debt ceiling," said Rep. Tom Cole, R-Okla.

The Treasury has taken steps to preserve cash, but once it runs out, it will be forced to rely on incoming revenue to pay its obligations. That would likely mean delays in payments to Social Security recipients, veterans and government workers, including military personnel. The Bipartisan Policy Center, a think tank, projects that the federal government would be unable to meet about 40% of payments due in the several weeks that follow.