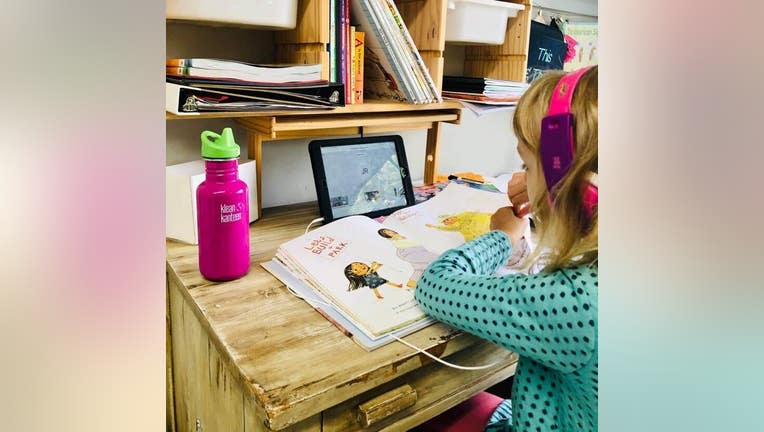 Natalie Mathison said she let her 6-year-old decide how she wanted to set up her room for school, and that "gave her ownership of her sense of space."

OAKLAND, Calif. - Voters have rejected a large tax increase on commercial properties, depriving schools of what could have been a significant source of revenue. Backers of Proposition 15, the first major effort to revise the iconic tax limitation initiative, Proposition 13, since its passage in 1978, conceded defeat on Tuesday.

Although 1.5 million votes, about 10 percent of the total cast, remain to be counted, Prop. 15 has remained narrowly behind, with the margin of difference about the same as on Election Day: 48.2 percent for, 51.8 percent against.

The defeat leaves schools and community college without a prospect of additional long-term revenue while they're facing a pandemic that has hit low-income communities particularly hard, and potentially years of funding cuts and slow economic growth.

The initiative would have provided an estimated $2.5 billion to $4.5 billion annually statewide to schools and community out of an estimated $10.3 billion to $12.6 billion in revenue, with the rest going to cities and counties where the commercial properties are located.

The new revenue promised by Prop. 15 would not have provided any relief right away, however. The funding would have been phased in over 5 years, starting in 2022-23 -- a fact that both supporters and opponents underplayed in ads that emphasized immediate benefits or dire consequences. Nonetheless, Pedro Noguera, dean of the USC Rossier School of Education, called Prop. 15's defeat "a significant loss."

"We had a chance to really move California forward in per pupil spending," Noguera said on EdSource's most recent podcast. "We have made some progress, but at best we're in the middle of the pack now. We could do so much more and this has implications for California's future."

Dozens of prominent California Democrats announced their support, but Noguera said the lack of an identifiable spokesperson hurt the cause. Gov. Gavin Newsom nominally backed the initiative but didn't campaign for it -- unlike former Gov. Jerry Brown, who led the successful effort in 2012 to pass Prop. 30.

It generated billions of dollars in additional temporary sales and income taxes. Prop. 15 was an expensive and contentious campaign pitting Schools and Communities First, a coalition of community, religious and advocacy groups, and public service unions led by the California Teachers Association, against business and real estate interests, including the California Business Roundtable, the California Chamber of Commerce and the anti-tax California Taxpayers Association.

Next to Prop. 22, the successful $220-plus million mega-fight by Uber, Lyft and DoorDash to establish their drivers as private contractors, not company employees, Prop. 15 was the second-most expensive initiative, with more than $140 million raised. The No on Prop. 15 ended with a modest edge in money.

Prop. 15 would have changed rules for assessing properties for commercial and industrial properties while leaving Prop. 13's provisions for homes and all apartments intact. That's why it was referred to as a "split-roll" tax.

Under Prop. 13, the taxable value of a property can increase a maximum of 2 percent annually, and properties can be reassessed only when sold.

Losers take heart, winners feel vindicated Proponents were unbowed in acknowledging defeat. "Nobody said it would be easy, but the Schools & Communities First coalition took on this fight for the right reasons -- to address our state's most pressing challenges and inequities by investing in Californians," said Alex Stack, spokesman of Yes on Prop. 15. "Against all odds, Prop. 15 made history by taking on the status quo to ensure California becomes a more prosperous and equitable state for everyone."

"Schools lack the financial resources necessary to provide a high-quality learning environment for all students. Prop 15 presented an opportunity to reimagine how educational resources are directed rather than maintain the status quo," she wrote in a statement.

California Teachers Association President E. Toby Boyd said he was heartened by the strength of the grassroots coalition that organized to pass Prop. 15.

Opponents said the defeat proved their point. "From day one, we knew that if voters understood the harm this deeply flawed tax hike would impose on California's economy and its families, farmers and small businesses, voters would reject this ill-advised effort," said Rob Lapsley, president of the California Business Roundtable and co-chair of the No on Prop 15 campaign. "Today's victory should send a clear message to the proponents and warn all politicians that voters will continue to reject attempts to dismantle Prop 13."

Added Rex Hime, president and CEO of the California Business Properties Association, "Small businesses and property owners now have the opportunity to focus on making ends meet instead of formulating plans to close their doors. Every tax gets passed along or increases the cost of everyday goods and services. And that was certainly the case with Prop. 15."

In several polls preceding the vote, support for Prop. 15 was just shy or slightly above 50 percent.

But a rush of "No On 15" ads in the final weeks may have swayed wavering voters.

Prop. 15 would have exempted owners of commercial properties valued less than $3 million.

But small business owners in ads said the increased property taxes would be passed on to them in rents at a time when they're already suffering losses due to COVID-19. Other ads falsely claimed Prop. 15 would equal a $900 tax increase for every family in the state. Prop. 15's defeat will likely discourage future efforts to change Prop. 13 -- though it may not hold the same sway among young and middle-age voters born after its passage.

A more palatable version of Prop. 15, further raising the exemption for small business, with a tradeoff of less revenue, could rise again someday. But Bob Blattner, a Sacramento-based consultant and a school finance expert, dismissed that as unlikely.

"The one thing we did learn is that Prop 13 is still the third rail of California politics," he said. "You touch it even peripherally and you die."

Ryan Smith, chief external officer for the L.A. Partnership for Schools, said that he hopes that the defeat of Prop. 15 will create the conditions for a more constructive dialog with the business community.

"We have an economic imperative to ensure that our schools and communities are funded well because they are the future of our labor force," he said. "Our business partners should come to the table with our community-based partners and many others so that we can have a discussion about what's the long-term interest of the state."

With Prop. 15's defeat, many public school advocates will look to Washington for a significant federal bailout for schools, especially since CARES Act funding approved by Congress last March must all be spent by December.

But the poor showing of Democrats in U.S. Senate races has dimmed those prospects. "I think that most people believed that a Democratic trifecta, meaning a unified government where the Senate, the House and the presidency were all in same hands, was not only most likely but also would provide the most resources for schools," said Blattner. "That's looking pretty unlikely now."

USC's Noguera essentially agreed. "Education is still largely the state's responsibility," he said. "So we have to look to the state Legislature and to Gov. Newsom for some new ideas and new approaches to improve funding for our schools."