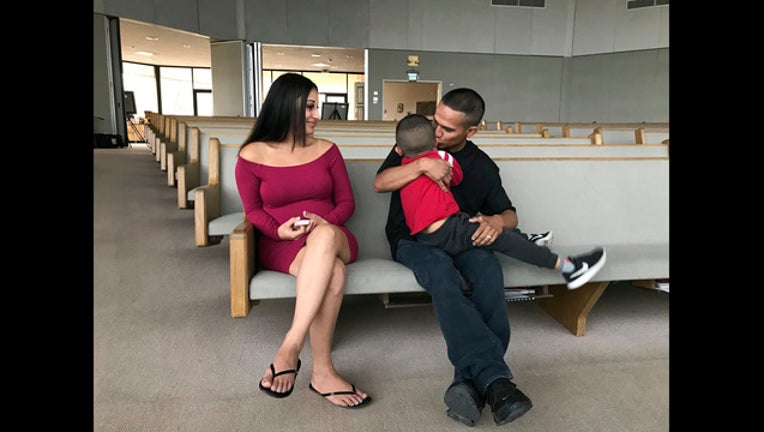 Jesus Berrones holds his five-year-old son, Jayden, as his wife, Sonia, looks on at the Shadow Rock United Church of Christ in Phoenix Monday, Feb. 12, 2018, where he has sought sanctuary to avoid deportation back to his native Mexico. The church is

PHOENIX (AP) - PHOENIX (AP) - An immigrant man with five children and a pregnant wife said Monday he was granted a last-minute stay of deportation after he sought sanctuary in a church saying he needed to remain in the United States to support his family, including a 5-year-old son with leukemia.

The 30-year-old Jesus Berrones, who has lived in the U.S. since he was a toddler, had been staying at the Shadow Rock United Church of Christ in Phoenix since Friday. He was supposed to meet with immigration authorities Monday to begin proceedings for his return to Mexico.

But Berrones said he received word late in the afternoon that he had been granted a one-year stay.

"In an exercise of discretion, ICE has granted Jesus Armando Berrones-Balderas a one-year stay of removal on humanitarian grounds," said a statement issued Monday evening by the U.S. Immigration and Customs Enforcement office in Phoenix. "ICE issued a previous one-year stay in June 2016."

Shadow Rock is among churches around the U.S. that have let some immigrants faced with the threat of deportation remain at their sanctuaries until their legal situation has been resolved.

The practice, which many churches also used in the 1980s to protect Central Americans fighting deportation back to their war-torn countries, has become more prevalent amid a more aggressive approach under the administration of President Donald Trump. Immigration attorneys have reported that ICE has increasingly denied extensions to immigrants who used to receive them routinely at their annual check-ins, including people who sought leniency because of family members with medical problems.

"Sending him back to Mexico would be sending him back to a country he doesn't even know," Berrones' attorney Garrett Wilkes said before the stay was issued. Under the administration of President Donald Trump, "there is a mentality of deport now, ask questions later," he said.

Wilkes had said he hoped the family's story would put a human face on immigration policies that are "in dire need of reform."

Originally from the Mexican state of San Luis Potosi, Berrones said he was one when his parents brought him to the United States in 1989. His mother remains in the U.S. and his father is in Mexico following his own deportation.

Berrones said his legal problems began in 2006 when he was 19 and arrested for driving with a fake license and he voluntarily returned to Mexico. He re-entered the country illegally twice after that to rejoin his family.

His 24-year-old wife, Sonia Garcia, and their children are American citizens. Their son Jayden was diagnosed with leukemia in 2016 and is undergoing a three-year course of chemotherapy.

Garcia said she cannot work because she has to be available to take Jayden to his many medical appointments. She had worried how the family would survive without her husband's salary from his job cleaning air conditioning ducts.

"My hopes are that everything's going to be well," Garcia said before the stay was issued. "I leave it all in God's hands."