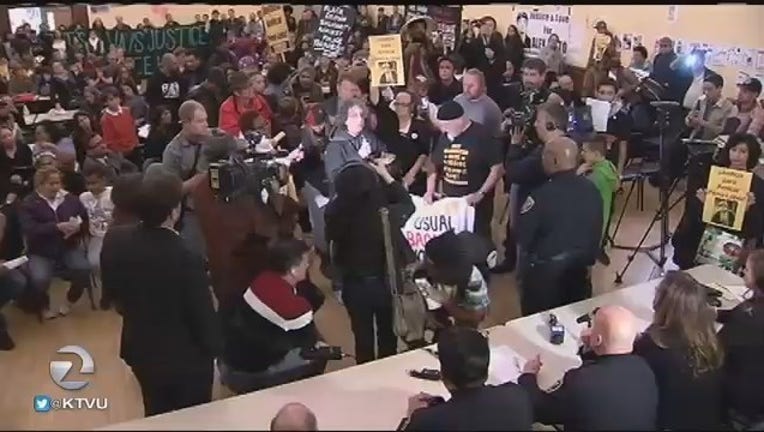 The fatal shooting of a 20-year-old Guatemalan immigrant Feb. 26 has two distinct versions.

As the two officers tell it, Amilcar Perez Lopez lunged at them with a knife and they opened fire, in fear for their lives.

As police critics tell it, Perez Lopez was unarmed and running away from the officers, when they shot him a half dozen times.

"Six shots through the back...we say fight back," shouted the demonstrators, as they wound from 24th Street and Folsom, where the shooting happened, to the Mission Police Station at 17th and Valencia.

"S-F-P-D Stop Police Brutality," was another chant, as they lit candles in front of the station, with officers standing guard.

Earlier in the day, an attorney for the Perez Lopez family announced the filing of a federal civil rights lawsuit, and a request for a Justice Department review of the case.

Casillas says private investigators found witnesses who described seeing Perez Lopez shot - not on the sidewalk as police said - but on the street as he tried to run away.

He also believes Perez Lopez, who worked two jobs, in construction and at a restaurant, did not realize the plain clothes officers were cops, and ran because he was fearful.

Most damning, Casillas says, is an independent autopsy, he says concludes all six bullets came from behind, and that Perez Lopez's arms were at his side.

That contradicts what Chief Greg Suhr told the community just days after the incident.

"The officers were approximately five to six feet away," Chief Suhr explained at a Town Hall meeting, "when the suspect charged at the officers with a knife raised over head."

At that meeting, Suhr showed the audience a picture of the knife Perez Lopez was holding.

The police call came in as someone running on the street with a knife, possibly trying to steal a bicycle.

The family's attorney admits the young man did have the knife but that the weapon was seen and heard falling to the pavement before he was shot.

He acknowledges Perez Lopez had brandished the knife, moments before, during an altercation with an acquaintance. That man was on a bicycle and the feud had to do with Perez Lopez getting into his own apartment.

"That man told us that even he himself was shocked that they shot Amilcar Perez Lopez," insisted Casillas. "The official version is a lie, people lie, but physical evidence doesn't lie."

By Friday evening, the lawsuit had not been received at the San Francisco City Attorney's Office, but a spokesman said the conclusions of the original investigation were solid.

"Right now those allegations don't square with the evidence as we know it," Matt Dorsey told KTVU, "and based on the eyewitness accounts and the evidence we have, this was an appropriate use of force by the police officers."

From Guatemala, the young man's parents spoke via Skype during the news conference.

They depended on their son to send some of his earnings back home. "This is the last thing they expected when they sent him to the United States," declared Casillas.

The independent autopsy was done by a medical examiner in Sonoma County, who confirmed the findings to KTVU.

Protestors ended their march by lying down in front of the police station to simulate death, but they didn't stay silent for long.

"We're here to say right now, Chief Suhr you are a liar, a liar," shouted activist Jonathan Melrod into a bullhorn.

KTVU reached out to the Chief several times Friday for a response to the allegations, but has not received a response.