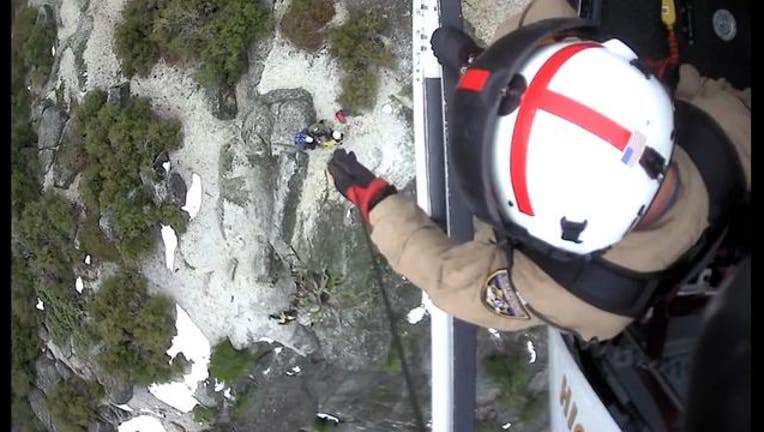 YOSEMITE NATIONAL PARK, Calif. (KTVU) - The California Highway Patrol helped save the lives of two English hikers stranded in the snow at Yosemite National Park, and the agency provided dramatic helicopter video of the rescue.

The CHP's Central Division Air Operations posted on its Facebook page that the agency sent up a helicopter piloted by on Jan. 16 about 7 a.m. over the North Dome area after learning two Brits, both in their 20s, had gotten lost the day before.

After a short reconnaissance looking at snowy mountaintops, the crew found the men wedged within a crevasse on the east side on North Dome. The hikers told the officers that as they went down into Yosemite Valley, they lost the trail in the snow and became trapped in a crevasse. They couldn't make it down, the CHP said, because of a 2,000-foot vertical drop. They called 911 from a cell phone.

After locating the hikers, the chopper landed in Ahwahnee Meadow to meet with Yosemite National Park Search and Rescue and devise a plan.

The two Yosemite team members were inserted with rescue gear that enabled them to reach the men and raise them out of the crevasse to a safe and relatively flat location, above the cliff they had slept on overnight, the CHP said.

Once the two hikers were packaged in rescue harnesses, the chopper returned and hoisted out each man, one at a time. They were then taken to Ahwahnee Meadow where Yosemite National Park Paramedics were staged to receive and treat them.

Their conditions as of Monday were not immediately known.