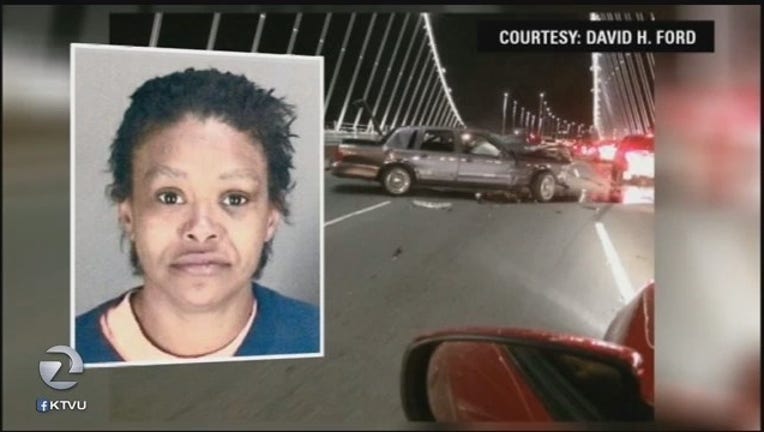 Prosecutors just filed charges in the case, after a toxicology report indicated the wrong-way driver was high on a dangerous combination of methamphetamine and marijuana.

The suspect, 33-year-old Kerrie Lynn Morgan of Vacaville, is currently in jail in Napa County after a drug arrest there in April.

Once Morgan is sentenced and serves time on those charges, she'll be transferred to San Francisco to face a long list of charges in last year's horrific head-on crash on the eastern span.

Authorities say Morgan traveled westbound on the eastbound shoulder of the bridge for almost two and a half miles before crashing head-on into one vehicle and sideswiping another.

KTVU has learned Morgan is facing four felonies and six misdemeanors, including driving under the influence of a controlled substance.

36-year-old Jared Petty of Richmond and his 35-year-old wife Angie were in the first car hit.

According to the CHP report KTVU obtained, Jared said he looked up and "saw a car facing us with no headlights."

She was driving and had to be extricated from the vehicle by the jaws of life.

"She had fractured her skull, fractured both legs, fractured her right arm," said the couple's attorney, Kaitlyn Johnson. "She had torn all of the ligaments in her neck. They had to restructure her neck."

Johnson spoke publicly for the first time about her clients' injuries, telling KTVU the past several months have been really difficult, especially for Angie.

She spent more than a month in ICU, has undergone six surgeries and is unable to walk on her own.

"At this point she still can't sleep in her own bed," Johnson said. "She's still in a hospital bed at home. Just everyday little tasks are completely impossible for her right now."

A life changing moment that happened, authorities said, at the hand of a high and unlicensed driver.

Morgan is set to appear in court in Napa on the unrelated drug arrest on June 10th.

Shortly after, she'll be arraigned in San Francisco on the ten counts related to the Bay Bridge crash.