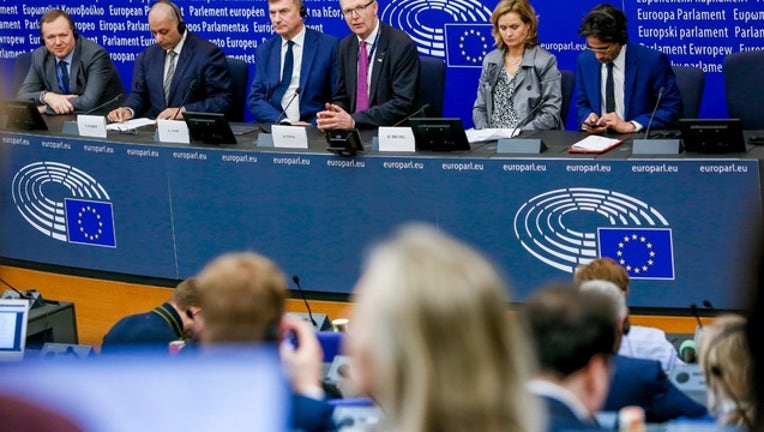 San Jose, Calif. (KTVU) - The European parliament approved a controversial set of rules governing copyright on the internet Tuesday that would force tech platforms to share revenue with rights holders, and make internet companies liable for copyrighted content uploaded to their site.

The parliament voted 348-274 to pass the bill with the intent to empower creatives and news publishers against tech giants that operate internet platforms such as Facebook, Google News, and YouTube. Under the new law, such platforms would be required to proactively screen content uploads for potential copyright infringement, and pay copyright holders for using snippets of content.

Critics say that clauses such as Article 11 (called the Link Tax) and 13 (called Upload filter, now renamed Article 17) of the Copyright Directive pose a threat to freedom of expression on the internet. Over 170,000 people across Europe took the streets to protest against the Copyright Directive, and a Change.org petition has seen over five million signatures.

One of the prevailing fears is that the law will prevent the proliferation of internet memes. A press release by the European Parliament says that “uploading protected works for quotation, criticism, review, caricature, parody or pastiche has been protected even more than it was before, ensuring that memes and Gifs will continue to be available and shareable on online platforms.” However, it is unclear how internet platforms will be able to make that distinction, leading to fears that they will just outright ban on any copyrighted material used to create memes.

Google has been a vocal critic of the law - YouTube CEO Susan Wojcicki has said in the past that Article 13 “threatens to block users in the EU from viewing content that is already live on the channels of creators everywhere.”

"The #eucopyrightdirective is improved but will still lead to legal uncertainty and will hurt Europe's creative and digital economies," Google Europe tweeted on Tuesday.

“The free and open internet is being quickly handed over to corporate giants at the expense of ordinary people.  This is not about helping artists, it is about empowering monopolistic practices,” Wikipedia Founder Jimmy Wales tweeted.

The law had been had been in the works since 2016, and will take at least two years to implement, after member states accept the parliament’s decision.