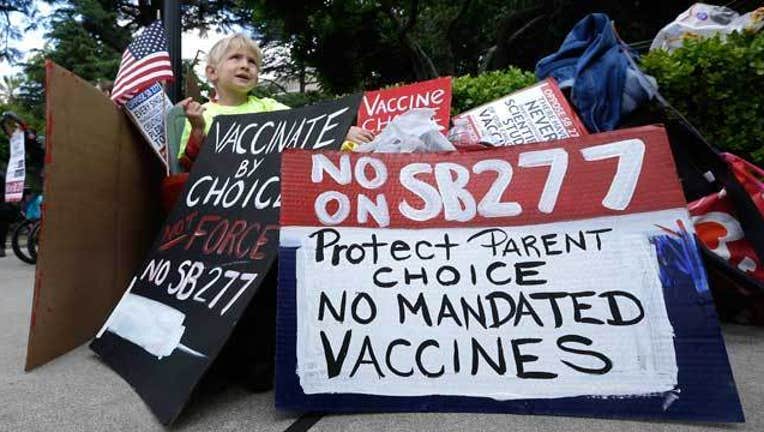 SACRAMENTO, Calif. (AP) — If California's strict school vaccine bill becomes law, experts believe it could help prevent another outbreak like the one that occurred at Disneyland.

The bill was introduced after a measles outbreak traced to the theme park in December infected over 100 people in the U.S. and Mexico. It would likely be successful in increasing immunization rates and stopping the spread of disease, pediatric doctors said Monday after the Senate sent the legislation to the governor.

"Historically, we know that attaching requirements for school entry to vaccination has been one of the most successful ways to increase immunization rates," said Dr. Douglas Opel, a professor at the University of Washington who specializes in pediatric bioethics.

The bill strikes the state's personal belief exemption for vaccines. Children without a medical exemption, which will still be granted to those with serious health issues, will either have to be homeschooled or get fully vaccinated by kindergarten and seventh grade, the state's two vaccine checkpoints.

It applies to public and private schools, as well as day care facilities.

The Senate reaffirmed the bill on a 24-14 vote. Mississippi and West Virginia are the only two states with such strict requirements in place.

The bill has prompted the most heated legislative debate of the year, with thousands of parents taking to social media and flooding the Capitol in recent weeks to oppose the bill at legislative hearings. Similar legislation was dropped in Oregon earlier this year because opposition was so fierce.

Democratic Gov. Jerry Brown has not said if he would sign the bill, which he has 12 days to consider.

"The governor believes that vaccinations are profoundly important and a major public health benefit, and any bill that reaches his desk will be closely considered," spokesman Evan Westrup has repeated in recent days.

Democratic Sens. Richard Pan and Ben Allen, the bill's sponsors, have said it is a crucial public health measure.

Opponents of the bill have pushed back, saying it restricts parental rights with the false promise of stopping the spread of communicable disease.

"Patient zero can still come into our country and infect people," said Sen. Joel Anderson. "Patient zero isn't those unvaccinated kids. They're the victims of people, of our failure to ensure that we're providing a safe environment when foreigners come to our country, or when we've travelled abroad and brought back those diseases."

But Dr. Eric Kodish, who specializes in pediatric ethics and oncology at the Cleveland Clinic, said there is significant evidence that legislating vaccines leads to real results.

"The combination of good law and good policy with face-to-face interactions with pediatricians will have an effect," he said.

The legislation aims to increase immunization rates in regions that have seen a sharp drop. Though California's overall vaccination rates are stable, some suburban pockets of the state have vaccination rates hovering near 50 percent. This poses major problems for what immunologists call "herd immunity," or the percentage at which enough people are vaccinated to protect the community as a whole. Herd immunity for measles is between 92 and 94 percent, according to the Centers for Disease Control and Prevention.

Still, parents opposed to the bill are holding firm. They have said that the measure infringes upon informed consent and violates equal access to education. Some have even vowed to take legal action, though the issue has previously been upheld in court.

"I will sue to put my child in school," said Jude Tovatt of Roseville and the parent of an 8-year-old child. "I will not run from the state that is our home."

Other parents cheered the legislative vote and immediately turned their attention to swaying Brown.

"I know that he is very pro-science and that's really what this bill comes down to: leadership in public health, and supporting evidence-based science," said Hannah Henry, mother of four from Napa who started Vaccinate California, a parental group in support of the bill. "That's where I'm expecting him to sign this bill."

Although the bill passed the Senate and the Assembly with bipartisan support, it did not pass with a two-thirds threshold that would be needed to override a governor's veto.

The Senate voted Monday on changes made to the bill in the Assembly that make it easier to obtain medical exemptions. The amendment would allow doctors to use a family's medical history as an evaluating factor.

The bill authors also agreed to establish a grandfather clause, allowing students who currently claim a personal belief exemption to maintain it until their next vaccine checkpoint.