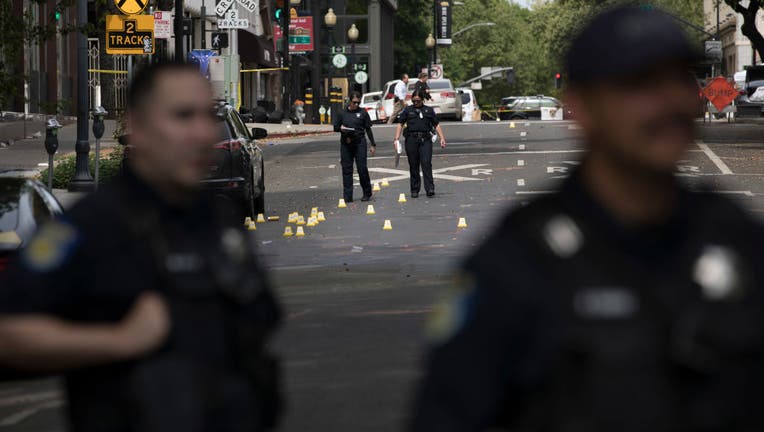 Police officers work at the scene of a mass shooting on April 3, 2022, in Sacramento, California. (Photo by Liu Guanguan/China News Service via Getty Images)

SACRAMENTO, Calif. - Six people were killed and 12 wounded in Sacramento last weekend in what police say was a shootout between rival gangs as bars closed and patrons crowded in the streets just blocks from the California state Capitol.

The explosion of gunfire captured on cellphone videos was punctuated by the screams of terrified people running for cover. More than 100 bullets were fired — many in rapid-fire bursts — during the brief battle.

Police said at least five gunmen from at least two gangs opened fire, but so far only three men have been arrested in the investigation and none has been charged with homicide. Only two of those men — brothers who were among the wounded — have been connected to the shooting, though they only face firearms charges at this time.

Some things to know about the situation:

WHO HAS BEEN ARRESTED IN SHOOTING?

Two brothers, Smiley and Dandrae Martin, are the only two people arrested so far who have been connected by police to the shooting.

A third man was arrested near the scene of the shootout with a gun that police do not think was fired during the melee.

Dandrae Martin, 26, is the only suspect identified by police as a shooter. He was arrested on suspicion of assault with a deadly weapon but prosecutors have only charged him with a gun possession offense.

Martin, whose gunshot wound was minor, did not enter a plea during a brief hearing in Sacramento Superior Court this week on a charge of being a convict carrying a gun. His lawyer said she wouldn’t decide whether to seek bail until prosecutors determine whether to charge him with a more serious crime.

Both brothers have felony criminal records that include convictions for violent attacks on women they encouraged to work as prostitutes, according to prosecutors and court records.

Smiley Martin was released from prison under supervision of probation officers in February after serving less than half his 10-year sentence because of voter-approved changes to state law that lessened the punishment for some felonies and provided a chance for earlier release.

A chance at freedom even sooner was rejected in May 2021 after prosecutors wrote to the Parole Board citing Martin’s lengthy rap sheet and said he "clearly has little regard for human life and the law."

WHAT HAPPENED BEFORE THE SHOOTING?

Police have yet to reveal what led to the shootout, but a 15-minute video posted live on Facebook earlier in the night by Smiley Martin showed him brandishing a large handgun, a law enforcement official told The Associated Press.

The video posted about four hours before the shooting was believed to be shot in a parking lot in north Sacramento.

Smiley and Dandrae Martin were in the video, along with Joshua Hoye-Lucchesi, one of the men who died in the shooting, said the official, who was not authorized to discuss details of the investigation publicly and spoke to AP on condition of anonymity.

Investigators believe some of the men involved in the shooting were members of the Crips street gang, the official said. At least one of the victims had been linked by law enforcement to the Bloods gang, according to the official.

In the video, Smiley Martin repeatedly waved a handgun at the camera, saying at one point he was going to a club but didn’t have identification, the official said. He also spoke of an affiliation with the Crips street gang and Hoye-Lucchesi could be heard making veiled threats against someone else, according to the official.

At other points in the video, it appeared the handgun was tucked in Martin’s waistband, the official said.

The video also showed local police officers drive nearby and call out to the group to ask if they had seen a child nearby, the official said. The men responded they hadn’t before the officer drove off.

Sacramento police spokesman Chad Lewis said officers were aware of video that included three of the people involved in the shooting. He said the video showed people waving guns and, at some point, a police cruiser rolled up.

WHAT TYPE OF GUNS WERE FIRED?

Police have yet to reveal what type of weapons were used in the shooting, but they have said more than 100 rounds were fired, which is based on the number of shell casings recovered.

Witnesses provided more than 200 videos and photos and tips that have helped investigators, police said. The explosion of gunfire heard on videos posted online had the ring of semi-automatic or automatic weapons.

A stolen handgun found at the scene had been converted to a weapon capable of automatic gunfire. Police were trying to determine if it was used in the shootout.

Smiley Martin faces a charge of possessing a machine gun, though police have said nothing about whether that weapon was used in the shooting.

The official who spoke on condition of anonymity said police were trying to figure out if the gun Martin was seen sporting in the video was used in the attack.

Police also seized a handgun during a search of three homes after the shooting.

WHO WERE THE VICTIMS?

They were three fathers raising their young children, a sister driving downtown to pick up her older sibling from a night out, a landscaper saving her pay for concert tickets and a woman living on the streets in search of housing.

The six people slain were remembered with memorials on the city’s downtown streets featuring photographs, candles, cards, balloons and, in one case, two empty bottles of Hennessy liquor.

Of the 12 people wounded, at least two remained hospitalized Friday.

Police have said Smiley Martin will be booked at the Sacramento County jail after he is released from the hospital.