Octopus rolls pipe with eggs inside into ocean

An Australian marine biologist witnessed an octopus rolling a plastic pipe filled with eggs into the ocean, as seen in a video taken on a beach in the Melbourne suburb of McCrae, Victoria, on June 6.

MELBOURNE, Australia - Fascinating video captured an octopus attempting to roll a pipe with eggs inside back into the ocean after it washed ashore in Melbourne, Australia.

On June 6, Sheree Marris, an Australian marine biologist, discovered a white pipe washed ashore on a beach in Melbourne’s McCrae suburb and decided to pick it up.

But when she went to retrieve it, she saw reddish-colored legs start to emerge from inside the pipe. It was an octopus.

Marris started recording video of the octopus attempting to roll the plastic pipe, which Marris soon discovered appeared to have eggs inside it, back into the ocean. 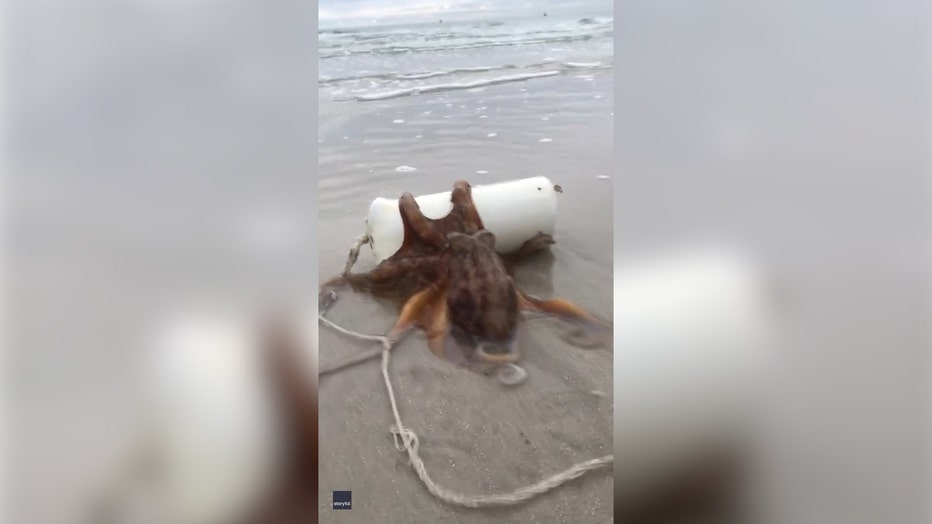 Freeze frame of video showing octopus pushing white pipe with eggs inside it back towards the ocean.

The marine biologist can be heard in the background of the video admiring the creature as it slowly rolled the pipe back towards the water, "Look at that, how extraordinary!"

"She was trying to protect her eggs inside, which were hanging like little white chandeliers from the roof of her makeshift nursery," Marris said.

Marris eventually took the pipe out into the water and stabilized it so it wouldn’t "roll around and back up on the shore.
"It was one of the most remarkable things I have ever seen," she added.