SUMMIT COUNTY, Utah - Extreme drought conditions in Utah appear to have unearthed a hidden "ghost town" that is normally under a reservoir in the state.

Drone footage captured on Sept. 11 by Devon Dewey shows the remnants of the town of Rockport, Utah. The town, which was originally founded in 1860, has been under the waters of the Rockport Reservoir since the late 1950s, according to officials.

The area has faced a drought this summer, which has resulted in the reservoir’s water levels falling to just a quarter of its total capacity, local reports say.

"It was really interesting to be standing at an overlook for the reservoir and to see faint traces of foundations of old homes and a road all below where the water would normally be," Dewey told the local news station KSL.com.

The former town was first settled by European-Americans in 1860, according to Utah State Park history. The settlers fled the area in 1866 during the Black Hawk War, but later returned in 1867 and built a large wall to prevent attacks.

The area went through several names, including Crandall, Enoch City and Rock Fort, until it was eventually renamed Rockport, historians say.

The town of Rockport’s population stayed around 100 to 200 people over the years, according to Utah State Park. But by the 1940s, its population started to decline. Some 27 families were still living in the area by the 1950s, and the government decided to build the Wanship Dam. In 1952, the federal government bought the land that encompassed Rockport, according to historians.

Before the dam was built, some of Rockport’s buildings were removed so they could be preserved for history, including an old town chapel and the Rockport School House, KSL reported. The rest of what stood was submerged by the new dam. 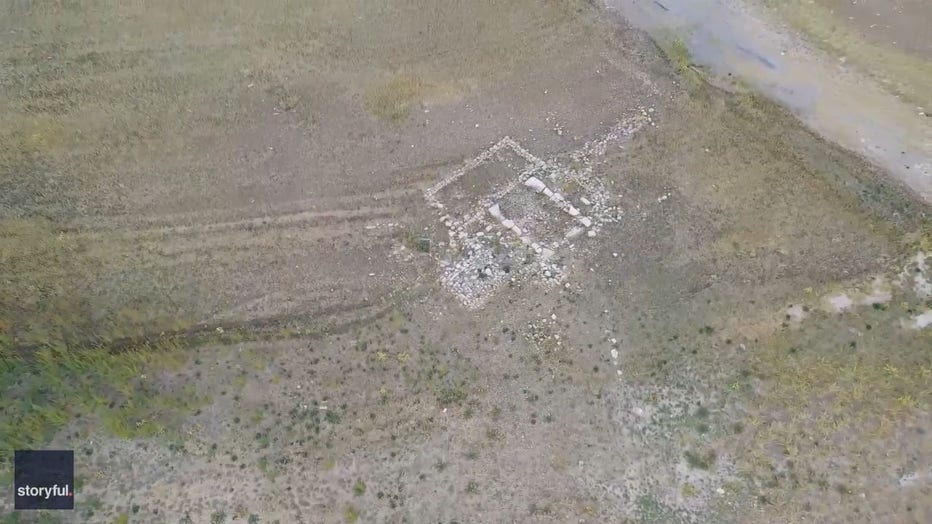 A screengrab from the video shows remnants of the town of Rockport, Utah, captured in drone footage on Sept. 11, 2021. Credit: Devon Dewey via Storyful

"Between 1954 and 1957, the Bureau of Reclamation built the Wanship Dam, which is 156 feet tall and 2,010 feet wide at the crest. The valley where the town of Rockport once lay was then flooded and Rockport Reservoir was created," Utah State Park says on its website.

The surface area of the lake covers 1,080 acres.

Currently, drought conditions in Utah range from "severe drought" to "exceptional drought," according to a regularly updated measurement by the National Oceanic and Atmospheric Administration. Some 2.8 million people were affected by drought in the state.