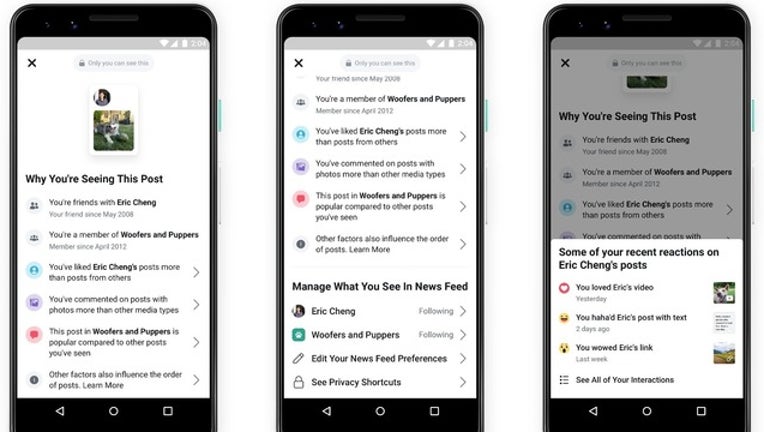 Facebook's “Why am I seeing this post?” feature explains the algorithmic decisions that drive its News Feed. Photo: Facebook

San Jose, Calif. (KTVU) - Ever wondered why a particular post appeared on your News Feed? The algorithmic decisions that dictate what content you see on your Facebook News Feed were a mystery, until now. On Sunday, Facebook announced the launch of a new feature titled “Why am I seeing this post?”, which provides some context on why a particular post was shown to you.

The feature is similar to the one it already provides for ads – it be accessed in the drop down menu in the right hand corner of a post. Friends, groups, or pages you follow are listed, along with a history of past interactions with specific type of posts – such as videos, photos, and links, and the popularity of the post.

The feature also lets you manage what you see in your news feed, providing controls that let you see a particular post first on your feed, unfollow, edit your news feed preferences, and edit privacy settings.
Facebook is also making updates to its “Why am I seeing this ad?” feature, which was launched four years ago. The feature now provides details on advertiser uploaded information, and marketing partners.

The new feature can be seen as an attempt by Facebook to win back the trust of its users, after being rocked by a series of privacy scandals and criticism over the spread of misinformation on its platform. Over the past week, Facebook announced the removal of thousands of pages, groups and accounts operated out of Iran, Russia, Macedonia and Kosovo, Philippines, India and Pakistan for “coordinated inauthentic behavior”.

Facebook CEO Mark Zuckerberg recently penned an op-ed in the Washington Post, calling for global regulations in policing harmful content, election integrity, privacy, and data portability. Early last month, he announced that Facebook will shift focus to private and ephemeral interactions instead of open ones – a move that has been interpreted as a pivot to a WeChat-like platform.