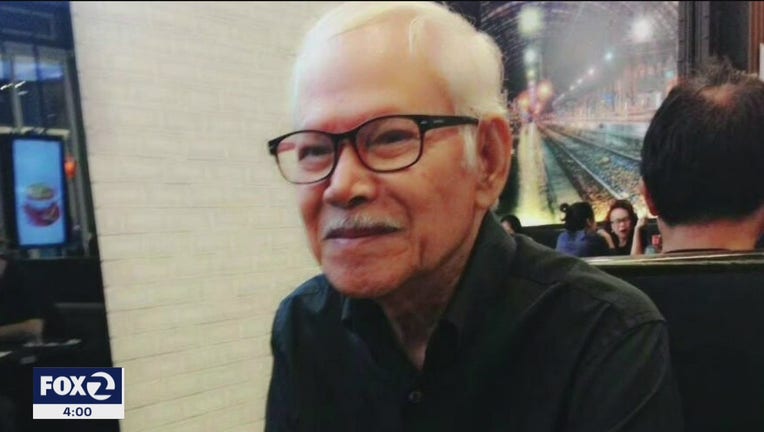 SAN FRANCISCO - The family members of an 84-year-old man killed in a seemingly unprovoked attack last week in San Francisco said Monday that they believe the victim was targeted because he was an Asian senior citizen.

They spoke to KTVU as District Attorney Chesa Boudin released a statement vowing to "hold the person who committed this senseless violence accountable."

Video of the shocking killing of Vicha Ratanapakdee in the city’s Anza Vista neighborhood was captured on a neighbor’s security camera and shared with KTVU.

An assailant, later identified by police as 19-year-old Antoine Watson, came barreling across the street around 8:30 a.m. Thursday in the quiet residential neighborhood, slamming into the fragile victim and sending him sprawling to the ground.

The startling broad daylight attack went viral on social media, striking a chord with members of the Asian American community in the Bay Area and beyond.

"If you see the video there’s nothing non-intentional about it," Ratanapakdee’s step-son, Eric Lawson, said in an interview with KTVU. "For him to come from all the way across the street what else could have motivated him?"

Lawson and his wife Kim, Ratanapakdee’s daughter, believe the assailant’s targeted their father because he was an Asian senior.

In fact, Kim Ratanapakdee said she has been the victim of several anti-Asian verbal attacks since the coronavirus pandemic halted life-as-usual last year.

The family visited homicide detectives on Monday as they continuted processing their grief, hoping for justice. They said Vicha Ratanapakdee had come to live with them from his native Thailand. They described him as a "gentle person who loved his family."

The district attorney’s office has until Tuesday to file charges after the case was presented by police on Monday.

Officers arrested Watson along with 20-year-old Maylasia Goo a home in Daly City on Saturday.

"I send my deepest condolences to the Ratanapakdee family for their loss," Boudin said in his statement. "This was a brutal, random, unprovoked attack.  My heart is also with the entire AAPI community for the pain they’re experiencing as a result of this tragedy and too many others over the past year.  We will hold the person who committed this senseless violence accountable."

The family has created a GoFundMe page to help pay for expenses around Ratanapakdee's death.