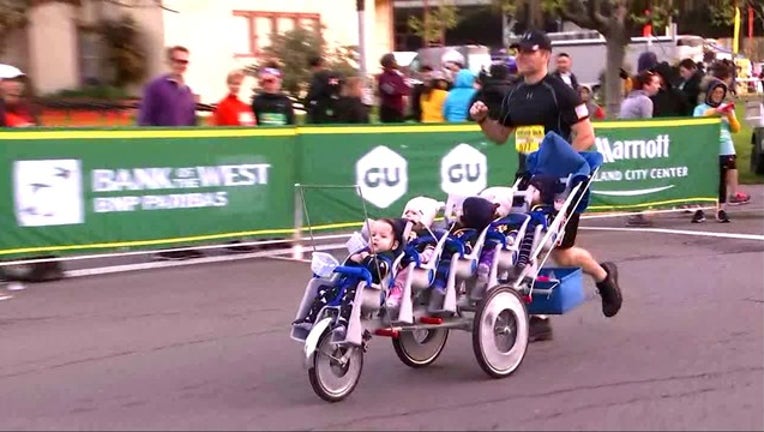 OAKLAND, Calif. - It was so close.

Chad Kempel, a 37-year-old father of quintuplets, pushed his five 1- year-olds in a mega stroller in the Oakland Marathon early Sunday, attempting to set a Guinness World Record.

“I’m bummed,’’ said Kempel, heading out to pizza with his family for a post-race meal. “It hurts to miss it by so close because that makes me think I’ve got to do it again. But at the same time, I don’t want to.”

This was Kempel’s second attempt to set a Guinness World Record.

Last month, he completed the Surf City Marathon in Huntington Beach, pushing the kids in their five-seat stroller, but he missed setting a record by about 45 minutes in that race.

Kempel said Sunday’s race, was a much smoother effort all around. The quintuplets - Lincoln, Noelle, Grayson, Preston and Gabriella- were on their best behavior and didn’t require bottle feeding or diaper changing during the race. Kempel said any fussing was quickly quieted by giving the child a handful of Cheerios.

“The kids did good at the last marathon, but this time they did even better,’’ said Kempel, adding that having his brother, Steven, ride a bicycle alongside him for potential feeding help and moral support was incredibly helpful.

KTVU tracked Kempel’s run through the Oakland Running Festival’s app. He was on pace to set the Guinness record throughout the first 11 or so miles. But a slight, but miles-long incline, leading up to the Bay Bridge pathway, slowed his target pace by several minutes.

“The bridge was a challenge going toward Yerba Buena Island,’’ he said. “The hill takes so much out of you, but as challenging as it was I loved running on the bridge (pathway).”

KTVU first told the story of the quintuplets in late 2017 while Kempel’s wife, Amy Kempel, was in the hospital on bedrest about 25 weeks into her pregnancy. Not long after, the babies were born on Jan. 11, 2018 by cesarean section.

They were 13 weeks premature and each weighed under 3 pounds.

They babies spent 73 days in the neonatal intensive care unit, battling a variety of health issues and struggling to gain enough weight and enough strength to go home.

“My brother was so helpful to have next to me on the bike the whole way. His motivational comments during those last 6 miles really pulled me through,’’ Kempel said. "He was reminding me how the babies probably felt like giving up in the neonatal intenseive care unit, but didn’t.”