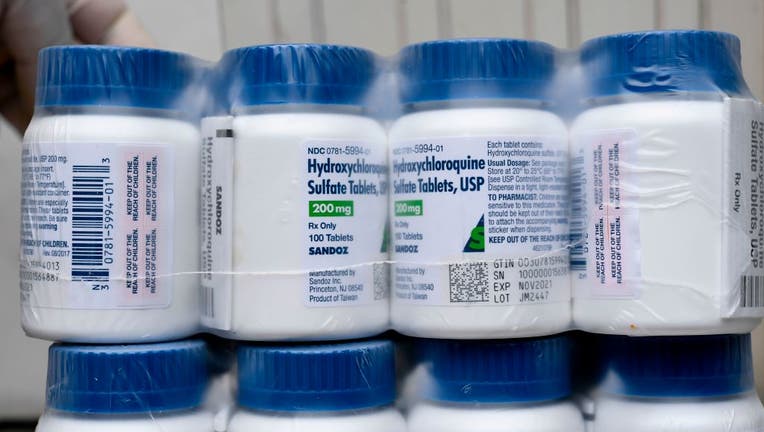 A Salvadoran Health Ministry worker shows a package of bottles of HydroxyChloroquine pills to be distributed in hospitals in San Salvador on April 21, 2020, amid the COVID-19 coronavirus outbreak. (Photo by Yuri CORTEZ / AFP) (Photo by YURI CORTEZ/AF

WASHINGTON - The U.S. Food and Drug Administration on Friday warned doctors against prescribing a malaria drug touted by President Donald Trump for treating the new coronavirus except in hospitals and research studies.

In an alert, regulators flagged reports of sometimes fatal heart side effects among coronavirus patients taking hydroxychloroquine or the related drug chloroquine. The decades-old drugs, also prescribed for lupus and rheumatoid arthritis, can cause a number of side effects, including heart rhythm problems, severely low blood pressure, and muscle or nerve damage.

The warning comes as doctors at a New York hospital published a report that heart rhythm abnormalities developed in most of 84 coronavirus patients treated with hydroxychloroquine and the antibiotic azithromycin, a combo Trump has promoted.

Both drugs are known to sometimes alter the heartbeat in dangerous ways, and their safety or ability to help people with COVID-19 is unknown. A National Institutes of Health experts panel earlier this week recommended against taking that drug combo except in a formal study because of the side effects potential.

Last month, the FDA authorized limited use of malaria drugs for hospitalized patients with COVID-19 who aren’t enrolled in ongoing research. The FDA said the drugs’ risks are manageable when patients are carefully screened and monitored by doctors. A number of studies are testing hydroxychloroquine as a treatment or for the prevention of COVID-19.

Regulators said they are now investigating dangerous side effects and deaths reported with the malaria drugs to poison control centers and other health authorities.

“It is important that health care providers are aware of the risks of serious and potentially life-threatening heart rhythm problems that can occur with these drugs,” the FDA said in a statement. The agency did not specify the number of reports it has received of side effects or deaths.

Calls to U.S. poison control centers about the malaria drugs increased last month to 79, compared to 52 in March 2019, according to Dr. Christopher Hoyte of the Rocky Mountain Poison Center in Denver, Colorado. The problems reported include abnormal heart rhythms, seizures, nausea, and vomiting, Hoyte said.

Trump has repeatedly touted hydroxychloroquine during his regular coronavirus briefings, suggesting its skeptics would be proven wrong. He has offered patient testimonials that the drug is a lifesaver.

But a number of early coronavirus studies have suggested problems or no benefit.

In Friday’s report in the journal Nature Medicine, doctors at New York University and NYU Langone Health found a significant prolonging of what’s called the heart’s QT interval two to five days after coronavirus patients were given usual doses of hydroxychloroquine and azithromycin. The drugs can alter the QT interval, or the time it takes the heart to charge between beats. When that time is too long, it can trigger a rhythm problem that can lead to sudden death.

Nine of the 84 patients had severe prolongation of this interval. Four patients died from organ failure but there were no evidence heart problems contributed. Severe disease or other health problems may play a role in whether the heartbeat abnormality develops, the researchers speculated.

The results show how important it is that these drugs only be used in a study where patients are closely tracked, said one independent expert, Dr. Rais Vohra, an emergency medicine specialist at the Fresno branch of the University of California, San Francisco.

“That combination really sets you up for having a problem with the heart,” he said. “My colleagues and I are concerned. People are self-medicating and coming down with very predictable side effects on the heart.”

Another recent analysis involving 368 patients in U.S. veterans hospitals found no benefit from hydroxychloroquine — and more deaths. The report was not a rigorous test of the drug and results have not yet been reviewed by other scientists but are the largest so far of its use in COVID-19 patients.

Accepting the donation required sign off by both the FDA and the Biomedical Advanced Research and Development Authority, or BARDA, a unit of HHS tasked with procuring treatments to combat bioterrorism and infectious diseases.

Earlier this week, former BARDA director, Rick Bright, said he was demoted from his job leading the agency because he resisted political pressure to allow widespread use of hydroxychloroquine. He has called for a federal investigation and reinstatement to his original job.