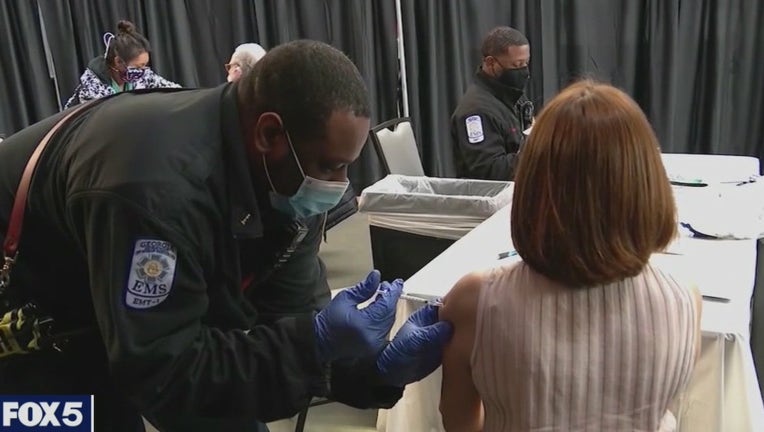 OAKLAND, Calif. - A group of Black federal, state and local officials encouraged the state's Black and African American residents Wednesday to get vaccinated against the coronavirus as soon as they can.

The roundtable discussion -- including state Secretary of Public Instruction Tony Thurmond, San Francisco Board of Supervisors President Shamann Walton and U.S. Rep. Barbara Lee, D-Oakland -- focused on the vaccine's role in ending the COVID-19 pandemic, which has disproportionately affected Black communities and other communities of color.

According to data from the California Department of Public Health, Black residents have received 3.2 percent of the 23.7 million vaccine doses administered statewide through Wednesday.

White residents, however, have received nearly 31 percent of those vaccine doses.

Participants on the panel acknowledged that vaccine hesitancy in spite of the pandemic's disproportionate effects on people of color is due in part to distrust of the medical establishment, which has repeatedly failed to provide equitable health care and treatment to Black and African American people throughout history.

"That may have created some distrust," Thurmond said. "For legitimate reasons, there's distrust that may have existed. But we know that these vaccines can save lives."

California officials have repeatedly described equitable vaccine distribution, and equity in general, as the state's "North Star" and a moral priority.

The campaign, which will also include collaboration with small business and community leaders that primarily serve Black residents, is intended to encourage hesitant members of the state's Black and African American communities to get vaccinated

Several panelists noted that simply making doses available across the state will not be sufficient to ensure that Black, African American and other people of color choose to get vaccinated.

Lee used the example of the Oakland Coliseum mass vaccination site, which has the capacity to administer roughly 6,000 vaccine doses per day onsite - and through mobile vaccination clinics in Alameda and Contra Costa counties.

"As of April 12, nearly 41 percent of doses at the Oakland Coliseum mass vaccination site have gone to white people, when they only account for about 28 percent of the population," in Alameda County, Lee said.

"In contrast, Black and Latinx Americans have received about 20-25 percent of the vaccines administered at mobile clinics," she said. "That number is on par with the proportion of Black and Latinx residents in my district."

Dr. Anthony Iton -- a health policy lecturer at the University of California, Berkeley, and a senior vice president for health communities with the California Endowment -- described vaccination as an integral part of both Black and American history.

Iton invoked the story of Onesimus, an enslaved African man in Boston in the early 1700s who described to the man who had purchased him, a Puritan minister named Cotton Mather, that he had undergone an operation called variolation to prevent smallpox by rubbing pus from an infected person into an open wound on a healthy person.

Variolation had a similar effect as vaccination, activating the body's immune response against smallpox and preventing illness and death from the disease.

The use of variolation in Boston and the fledgling United States ultimately led and gave way to the 1796 development of a smallpox vaccine, but Iton noted that Onesimus helped save the U.S. by transmitting information used among African nations and in parts of Asia to prevent smallpox.

"We created this practice which has the potential to save us in 2021," he said.