BELLINGHAM, Wash. - Washington Gov. Jay Inslee declared a state of emergency on Monday after flooding and landslides closed a portion of the West Coast’s main north-south highway, displaced hundreds of people and knocked out power across the region.

The extreme weather was caused by an atmospheric river — a huge plume of moisture extending over the Pacific and into Washington and Oregon.

Interstate 5 was closed near Bellingham, Washington, just south of the Canadian border, amid the ongoing threat from debris, mudslides and floodwaters. The Washington State Department of Transportation shared images of a mudslide on the interstate, which is a major highway system stretching from Mexico to Canada.

By Tuesday morning, the southbound lanes of I-5 had reopened but crews were continuing to remove debris on the northbound side.

Bellingham experienced record rainfall Sunday with a one-day total of 2.78 inches, crushing the prior daily record from 1998 at 0.88 inches, according to the National Weather Service. A daily rainfall record was also set Monday in Bellingham with 1.89 inches.

Inslee declared a severe weather state of emergency in 14 Washington counties late Monday. The proclamation said the state Emergency Management Division, with support from the Washington National Guard, would help coordinate the response to affected areas.

In Whatcom County, located in the northwestern corner of the state, emergency officials said more than 500 people had been displaced from their homes due to flooding. Extensive search and rescue efforts began early Monday and continued throughout the day, officials said.

"(Whatcom County Sheriff’s Office’s) rescue vehicle was able to reach many residents, and boats were used in places where the water was too deep. These efforts will continue throughout the night," the sheriff’s office said in a news release.

In Skagit County, the mayor of Mount Vernon also declared an emergency for the city on Monday. Amid anticipated flooding, it warned residents in the floodplain to "take action over the next 24-48 hours to protect their homes, families, and property from floodwaters."

A state of emergency for the nearby town of Hamilton was similarly declared. People there, about 80 miles northeast of Seattle, were urged to evacuate. 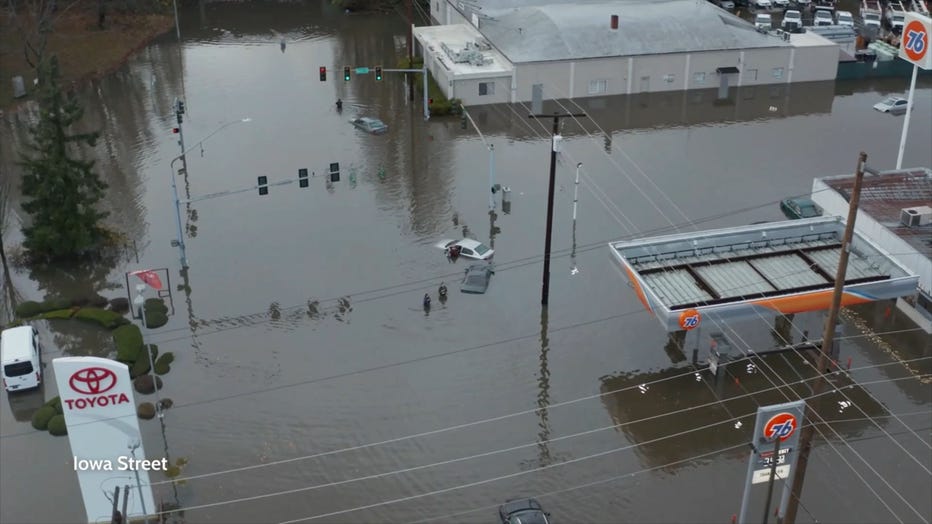 Strong winds also hit the region Monday with gusts pushing 60 mph in multiple places, including a gust of 58 mph at Seattle-Tacoma International Airport. More than 158,0000 customers were without power in Western Washington at one point Monday afternoon.

As of Tuesday afternoon, more than 45,000 remained in the dark.

Several schools were also closed Monday in the western part of the state, including Bellingham, Ferndale and Lynden, according to FOX 13 Seattle.

On Tuesday, forecasters said conditions should be much drier but flood warnings for several rivers around Western Washington remained in place.

This story was reported from Cincinnati. The Associated Press and FOX 13 Seattle contributed.