A Florida woman said she captured a photograph of what appears to show lightning striking the iconic Don CeSar hotel in St. Pete Beach, but that wasn't the only thing stunning thing about the image.

ST. PETERSBURG, Fla. - A Florida woman said she captured a photo of what appears to show lightning striking the iconic Don CeSar hotel in St. Pete Beach, but that wasn't the only thing stunning thing about the image.

Photographer Sue Byrne was taking photos on July 5 when she snapped an incredible combo of a rainbow while lightning was striking from Upham Beach looking over to St Pete Beach. Not only that, but from the left it looks like sun rays are shining through, making for one wild weather photo!

Viewers on social media were stunned by the electrifying shot. 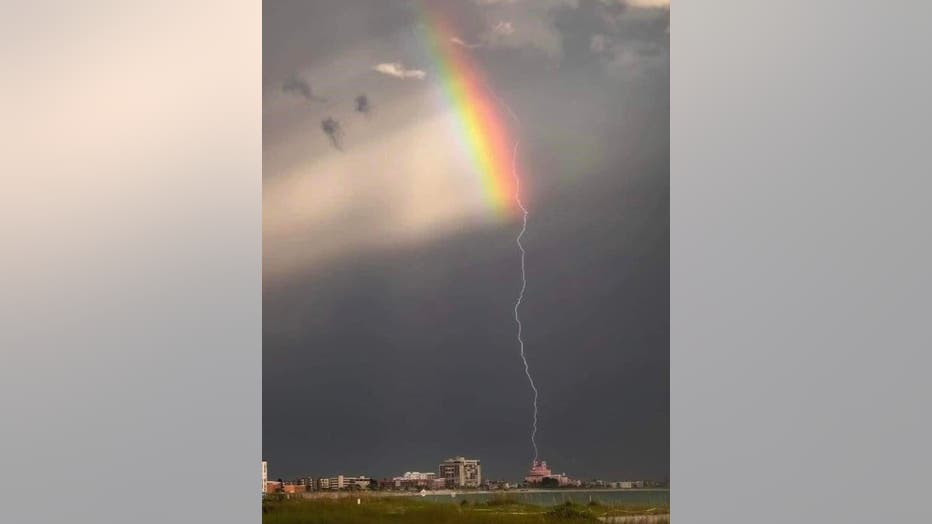 "That is beautiful!" said another.

"It was sunset, there's a storm in the background. A little bit of rain rolling down catching those last rays producing a half rainbow and of course, lightning hitting the tallest thing on the beach."

According to Live Science, lightning flashing near a rainbow is very rare.

Floridians have also been spotting some other pretty incredible weather phenomenons lately.

Just recently, several FOX 35 viewers sent in spectacular photos of a double rainbow that lit up the sky over Orlando and a woman in Coconut Creek, Florida snapped gorgeous photos of what forecasters call a cloud iridescence, or a "fire rainbow."