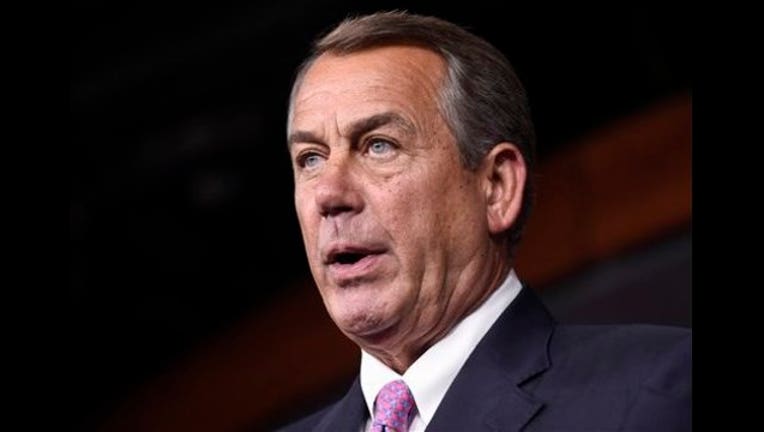 FILE - In this July 29,2015 file photo, House Speaker John Boehner of Ohio speaks during a news conference on Capitol Hill in Washington. According to GOP lawmakers, Boehner to step down end of October. (AP Photo/Susan Walsh, File)

CINCINNATI (AP) - CINCINNATI (AP) - Former U.S. House Speaker John Boehner said Wednesday he has had a change of heart on marijuana and will promote its nationwide legalization as a way to help veterans and the nation's deadly opioid crisis.

The Ohio Republican, an avid cigarette smoker, has joined the advisory board of Acreage Holdings , a multistate cannabis company. The company also announced that former Massachusetts Gov. William Weld has joined its advisory board.

Weld, a Republican as governor, ran in the 2016 presidential election on the Libertarian Party ticket that was headed by legal-pot advocate Gary Johnson.

Boehner said in a statement his position "has evolved" from opposing to supporting legalization of marijuana.

"I decided to get involved because of the struggles of our country's veterans and the opioid epidemic, after learning how descheduling the drug can potentially help with both crises," said Boehner, now 68.

He said he wants to see federally funded research done and to allow the Department of Veterans Affairs to offer marijuana as a possible treatment option for such conditions as chronic pain and post-traumatic stress disorder.

Boehner also said the move would curtail federal-state conflict on marijuana policies. While marijuana is illegal at the federal level, most states have legalized pot in some form. President Donald Trump's administration in January lifted a Barack Obama-era policy that discouraged federal authorities from cracking down on the pot trade in states where the drug is legal.

New York-based Acreage, which has cannabis operations in 11 states, said Boehner and Weld will serve on its board of directors when that is formed. Boehner had an earlier stint on a tobacco's company's board.

Paul Ryan, Boehner's successor when he resigned as speaker in 2015, had talked about the work of getting the smell of cigarette smoke out of the speaker's office after Boehner's departure.