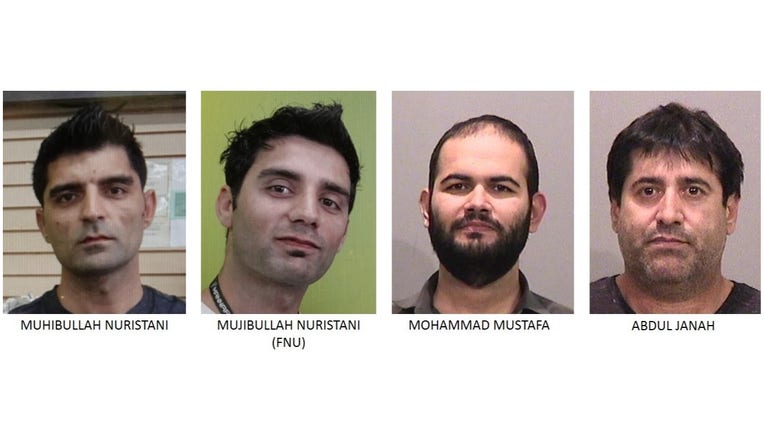 FREMONT, Calif. - Law enforcement investigators have shut down a sprawling cellphone fencing ring operation that involved the theft of merchandise from delivery drivers across the state that was then shipped abroad for resale, Fremont police said Friday.

The investigation has been ongoing since a series of sophisticated armed robberies of delivery truck drivers started late last year. It took months for investigators to identify suspects in the case.

On Oct. 25, Fremont police detectives partnering with eight other law enforcement agencies served search warrants in 10 locations, including at Torspin Wireless in Hayward, which police said was the largest fence for stolen electronics in the Bay Area.

Investigators also served warrants at another business, MJ Wireless in El Cajon, that they said was financing the fencing operation.

The vast majority of the stolen phones were being shipped abroad for sale, including to China, Dubai, Iran, Mexico, Russia and Vietnam, Fremont police said.

No one answered the phone at Torspin and MJ Wireless on Friday and a Twitter account for Torspin hadn't been active since the day of the raid.

"We know these fencing operations and the high price they pay for cell phones drive the auto burglary epidemic in the Bay Area," Fremont police Lt. Michael Tegner said in a statement. "We are hoping these arrests help to lower the crime rate."

The investigation dates back to December, when robbers began targeting UPS and FedEx delivery drivers who were delivering phones to stores.

During the deliveries, the assailants would rush the drivers, grab boxes of phones and run to getaway cars - rental cars with their license plates removed, according to the Alameda County District Attorney's Office.

Starting in May, the district attorney's office met with law enforcement agencies throughout the region that were investigating similar robberies as well as security teams from UPS and FedEx. But they weren't able to identify a suspect until Pleasant Hill police obtained a palm print left at one of the robbery scenes, prosecutors said.

Investigators with eight area law enforcement agencies identified 11 suspects in the robberies. On Aug. 29, they served search and arrest warrants in Oakland, San Leandro and Pittsburg.

Eight people were arrested and investigators obtained warrants for four more, at least three of whom have since been arrested.

According to police, the suspects were connected to 62 robberies in 31 cities across the state and stole nearly a million dollars worth of merchandise.

Fremont police said that almost immediately after the robberies, the robbers were selling the stolen phones to Torspin Wireless.

Investigators watched Torspin and MJ Wireless for months and conducted eight undercover selling operations, selling them 145 phones for $45,000, according to police.

On Oct. 25, they set up one last large buy, agreeing to sell 900 stolen phones to the two stores. Police arrested eight people and seized 1,800 electronic devices, $350,000 in cash, two shotguns and two handguns.

According to police, four of the eight suspects have been charged and were identified as Muhibullah Nuristani, Mujibullah Nuristani, Mohammad Mustafa and Abdul Janah. Prosecutors did not immediately return a request for further information about the charges.

Law enforcement is continuing to investigate. Anyone with information has been asked to contact the Fremont police at (510) 790-6900 or email Detective J. Roberts at Jroberts@fremont.gov.