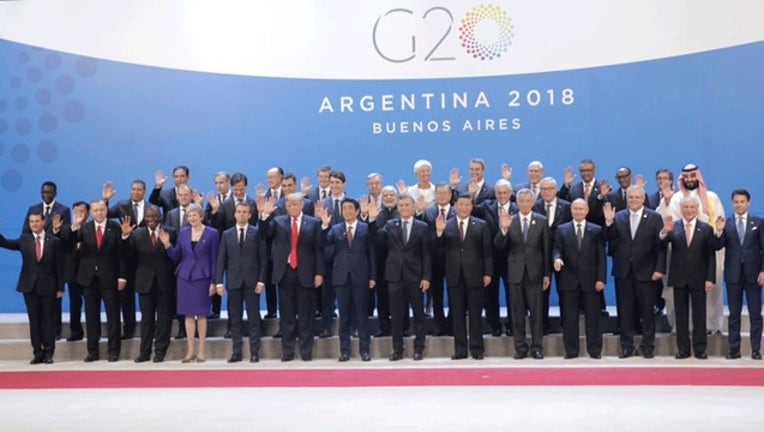 President Donald Trump (First row; 6L-R) and other leaders of G20 pose for the family picture during the opening day of Argentina G20 Leaders' Summit 2018 at Costa Salguero on November 30, 2018 in Buenos Aires, Argentina.(Daniel Jayo/Getty Images)

BUENOS AIRES, Argentina (AP) - Diplomats from the Group of 20 countries were haggling hard over a final summit statement Friday, with deep divisions over what language to use on the Paris climate accord and the World Trade Organization, according to two European officials involved in the discussions.

Facing the prospect of a no-statement summit, European delegations were trying to create a common front and may come out with their own separate declaration if they can't get the U.S. or others on board. European leaders were meeting in the morning at the summit venue in the Argentine capital to stake out common positions on trade, climate and the killing of dissident Saudi journalist Jamal Khashoggi.

France is seeking to build coalitions on certain issues or "ad hoc partnerships" to try to salvage the spirit of the G-20 even if all countries can't agree, according to a French official.

The officials weren't authorized to be named speaking about the closed-door discussions and spoke on condition of anonymity.

The G-20 was supposed to focus on issues like development, infrastructure and investment, but as the gathering officially kicked off, those themes seem like afterthoughts, overshadowed by contentious matters from the U.S.-China trade dispute to the conflict over Ukraine.

European Council President Donald Tusk urged G-20 leaders to discuss "trade wars, the tragic situation in Syria and Yemen and Russian aggression in Ukraine." He said the European Union is expected to extend sanctions on Moscow over its "totally unacceptable" seizure of Ukrainian ships and their crews near Crimea.

"Europe is united in its support for Ukraine's sovereignty and territorial integrity," Tusk said, calling the standoff "a cause of great concern."

Russian President Vladimir Putin, who arrived in Buenos Aires on Friday morning, is among the leaders involved. Russia and Ukraine have traded blame over the ship incident.

Also expected to loom large amid dozens of bilateral meetings in Buenos Aires: the gruesome slaying of Khashoggi in Saudi Arabia's Istanbul consulate and how the Saudi crown prince, who is alleged to have ordered the killing, is received by world leaders.

He didn't mention the killing itself, but stressed the importance of the "basic safety of journalists" and said "it's our obligation to press our partners to respect these basic principles."

Saudi Arabia has denied that Crown Prince Mohammed bin Salman played a role, but some leaders may be cool toward him to avoid seeming to legitimize a man who U.S. intelligence agencies concluded ordered the killing. U.S. President Donald Trump's administration has made clear it does not want to torpedo the longstanding U.S. relationship with Riyadh, however.

It is the prince's first significant appearance overseas since the killing. Turkish President Recep Tayyip Erdogan, who has been sharply critical of Saudi Arabia over the incident, is also in attendance.

Leaders of the United States, Canada and Mexico met in the morning to sign a trade deal replacing the North American Free Trade Agreement that was struck following months of tough negotiations that analysts say left a bitter taste among the partners.

Trump called the pact known the USMCA a "model agreement that changes the trade landscape forever."

It must still be ratified by lawmakers in all three countries, and passage in the U.S. could face a tough road in the House of Representatives after Democrats won a majority in November midterm elections.

Trade agreements should "move along with the economy," Pena Nieto said.

Trump met in the morning with summit host and Argentine President Mauricio Macri at the presidential palace known as the Casa Rosada, or Pink House. Posing for photos in a gilded salon, Trump spoke about their longtime personal relationship and said they would discuss trade, military purchases and other issues.

An expected high-profile bilateral meeting between Trump and Russia's Vladimir Putin planned for Saturday was abruptly canceled by Trump the previous day in a tweet citing Russia's seizure of Ukrainian vessels over the weekend. Russian news agencies quoted Putin spokesman Dmitry Peskov as saying the cancellation means Putin will have more time for "useful meetings."

Trump was still scheduled to meet with Chinese President Xi Jinping, but analysts were not optimistic about prospects for a major breakthrough on the two countries' trade disputes a month before U.S. tariffs on Chinese goods are set to ramp up.

German Chancellor Angela Merkel was supposed to get in to Buenos Aires early Friday, but her arrival was delayed when her plane suffered a technical problem and returned to Germany on Thursday night. Merkel's office said Friday that she and a small delegation, including the finance minister, took a different government plane to Madrid and then boarded a commercial flight to Buenos Aires.

The British Embassy in Argentina said Prime Minister Theresa May's visit would be the first by a U.K. prime minister to Argentina's capital. The only other prime minister to visit the country was Tony Blair, who went to Puerto Iguazu in 2001. The two countries have long been at odds over the South Atlantic islands known as the Falklands in Britain and the Malvinas in Argentina.

Argentine Foreign Minister Jorge Faurie said the recent establishment of more flights to the disputed islands was a positive development.

Regarding May's visit, he said: "Macri has reiterated at various moments that dialogue must be maintained. ... The issue of sovereignty is always on the table."

"We are not withdrawing our historic claim," he added. "The focus of this opportunity is in the reestablishment of trust."

Copyright 2018 The Associated Press. All rights reserved. This material may not be published, broadcast, rewritten or redistributed.