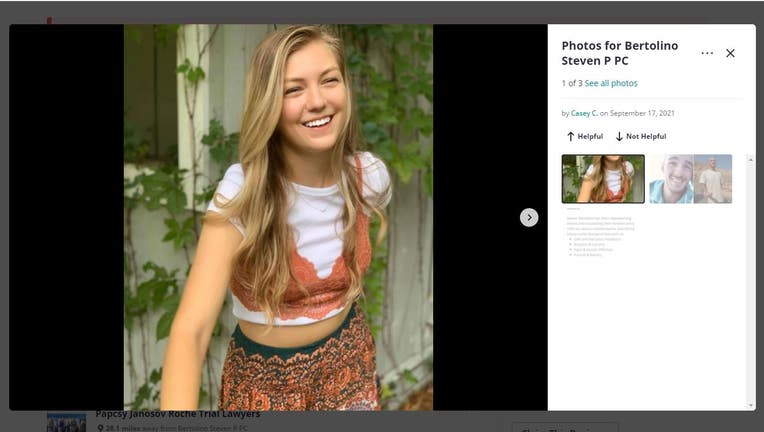 This screenshot from a Yelp page apparently Brian Laundrie's family attorney, Steven Bertolino, shows a Yelp user uploaded this image of Gabby Petito. Her family's attorney requested for it to be taken down. (Yelp/screenshot)

NEW YORK - The family attorney for Gabby Petito sent a letter to the attorney of Brian Laundrie’s family demanding that he remove a photo of Gabby from a Yelp page. Within the hour, the image was removed.

In the letter, obtained by FOX 13, Richard Stafford writes, "The Petito and Schmidt family are demanding that you remove Gabby Petito’s picture from your Yelp page. The family tried to remove their daughter’s picture from your page and were informed that only the business owner can add or remove pictures."

The Yelp page in question – which can be found here – showed a photo of Gabby which appears to be uploaded by a user named, "Casey C." The top of the website also has the following message, "This business is being monitored by Yelp's Support team for content related to media reports." The site also states that the business "has not yet been claimed by the owner or a representative."

It appears the photo was removed moments after the letter was submitted.

The search for Brian Laundrie resumed their Wednesday morning in the Carlton Reserve. Before noon, divers were called in as the search moves into bodies of water at the preserve.

RECENT: Where is Brian? Dive team called to preserve amid search for person of interest in Gabby Petito case

A separate photo was also uploaded showing a side-by-side image of Brian. It was uploaded by a different user under the name, "Hannah L," and it accompanied the following review that was posted on September 20:

"Terrible lawyer, definitely sketchy and not qualified to handle murder cases or deal with potential murderers" 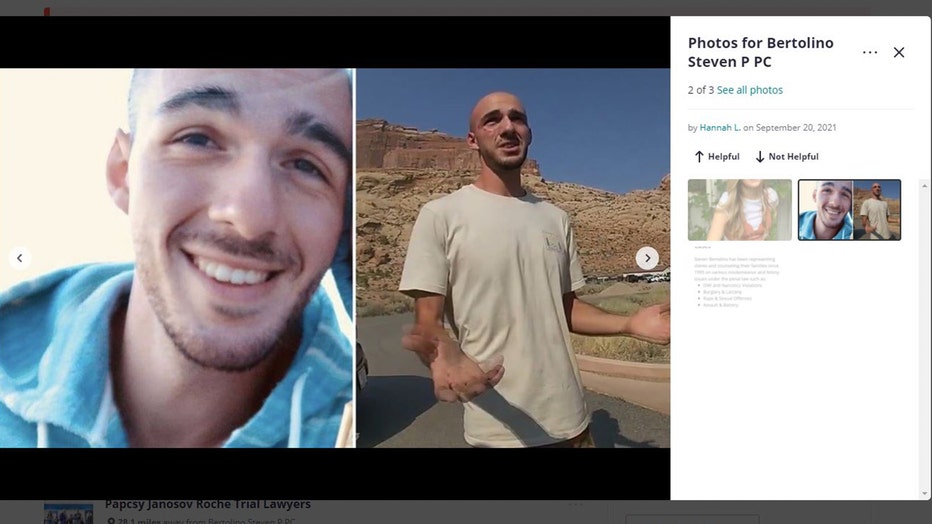 Stafford gave the attorney, Steven Bertolino, a 2 p.m. deadline to remove the image.

"Furthermore, the Petito and Schmidt family demand that you cease and desist posting pictures of Gabby Petito to any and all of your social media pages, web pages or advertisements in an effort to gain business. I am sure this will be taken care of by 2pm or I will take further action on behalf of Gabby’s family."

It's unclear whether Bertolino has been sharing photos of Gabby on other online platforms.

A message on the Yelp page said the website has since "temporarily disabled the posting of content to this page."

This business recently received increased public attention, which often means people come to this page to post their views on the news. While we don’t take a stand one way or the other when it comes to this incident, we’ve temporarily disabled the posting of content to this page as we work to investigate the content you see here reflects actual consumer experiences rather than the recent events. Please note that we apply this same policy regardless of the business and regardless of the topic at issue. Read more on Yelp Support.

If you’re here to leave a review based on a first-hand experience with the business, please check back at a later date.

Yelp later issued a statement clarifying what steps were taken:

"We can confirm that the user who uploaded the photo removed it today," the company tweeted. "Businesses and consumers can always report reviews and photos for removal if they believe the content violates Yelp’s Terms of Service or Content Guidelines."

LINK: The full letter can be read here.

The letter was sent one day after an autopsy confirmed the remains found near Grand Teton National Park belonged to Gabby. The manner of Gabby's death was homicide, but a specific cause of death will have to wait for the full autopsy results.

Search crews in Florida have been trying to track down Brian for several days after his parents reported him missing on Friday. On Wednesday, they began their fourth day of searching for him in the 25,000-acre Carlton Reserve park in Sarasota County.