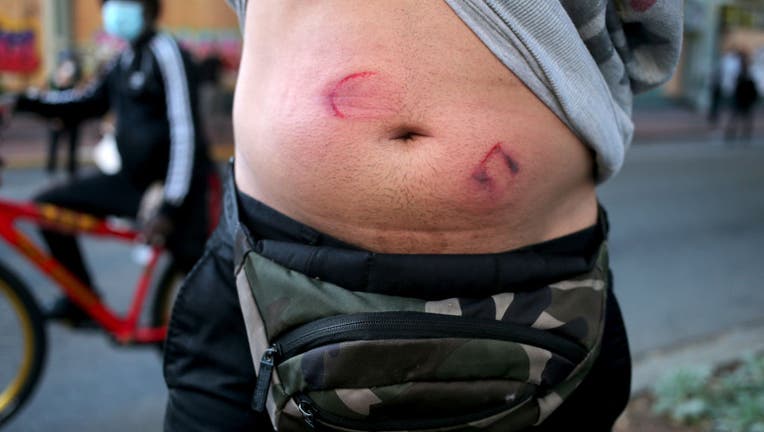 The suit, filed by civil rights attorneys Walter Riley and Dan Siegel against Alameda County Sheriff Greg Ahern on April 28, mirrors a similar suit the pair filed in June 2020 against the Oakland Police Department. That suit is now approaching a settlement, according to EmilyRose Johns, an attorney with the Siegal law firm.

Johns was not specific on why the suit against the sheriff was filed almost two years after the fact, other than to say that "only litigation will hold the sheriff accountable" and "they need to be stopped."

The plaintiffs, which include the Anti Police Terror Project and 26 protesters, want to "restrain the county of Alameda and ACSO from engaging in similar unconstitutional violence in the future," the lawsuit states. The plaintiffs are also seeking unspecified damages.

A spokesman for the Sheriff's Office referred comment to county counsel, who did not respond for comment. Typically, neither agency comments on pending litigation.

The suit alleges that the plaintiffs were injured during the George Floyd protests in Oakland between May 29 and June 1, 2020, because of the sheriff's "indiscriminate launching of tear gas and flash bang grenades" into a crowd of "peaceful demonstrators."

Johns said that many of her firm's clients still have respiratory issues from being gassed and pelted after Oakland police and sheriff's deputies tried to control the demonstrators with tear gas, flash bang grenades and projectiles. Other plaintiffs suffered bruising and burning eyes from the gas.

The suit also alleges that the sheriff's office violated the Oakland Police Department's policies and procedures for crowd control, even though deputies were required to follow these laws.

At the time, both the sheriff's office and the Oakland police claimed they had to resort to such chemical agents because the demonstrators were inciting violence, throwing Molotov cocktails and assaulting officers.

That narrative has since proved to be false.

After a yearlong investigation, Oakland police ultimately acknowledged the crowd on June 1 was not violent and no one was preparing to throw Molotov cocktails at officers on that night.

And last June, Oakland Police Chief LeRonne Armstorng apologized for what happened at a youth-led George Floyd protest the year before and he also announced that he had issued more than 33 disciplinary actions to officers for using tear gas, in violation of department and city policy.

"We failed on June 1," Armstrong said last year in a one-on-one interview with KTVU ahead of a news conference. "We deployed tear gas outside policy. I apologize to the young people that you had to experience what you experienced. This department is holding itself accountable."