Former President George W. Bush referenced what he described as the "wholly unjustified and brutal invasion" — but said Iraq, instead of Ukraine, during a speaking event on May 18, 2022,

Bush delivered remarks regarding the importance of democracy and threats to democracy in the U.S. and abroad.

"In contrast, Russian elections are rigged," he said. "Political opponents are imprisoned or otherwise eliminated from participating in the electoral process. The result is an absence of checks and balances in Russia and the decision of one man to launch a wholly unjustified and brutal invasion of Iraq. I mean of Ukraine."

Bush shrugged and said, under his breath, "Iraq, too." Russia has not invaded Iraq, and the Kremlin reportedly gave Saddam Hussein's government intelligence to combat the U.S. invasion early on.

Bush presided over most of the war in Iraq, authorized by a bipartisan vote in both the U.S. House of Representatives and the U.S. Senate in Oct. 2002. The war, which lasted until 2011, claimed the lives of more than 4,000 U.S. troops, along with those of tens of thousands of Iraqi civilians. Critics have long faulted Bush for the war, claiming that Iraq did not possess the weapons of mass destruction Bush feared.

The 2002 authorization cited many reasons to invade Iraq, however, including Iraq's alleged noncompliance with the 1991 ceasefire agreement' the country's "brutal repression of its civilian population;" its hostility toward the U.S. as demonstrated by the 1993 assassination attempt on former President George H.W. Bush; the country's harboring of members of al-Qaeda in the aftermath of the Sept. 11, 2001, attacks; Iraq's payment of bounties to the families of suicide bombers; and the governments of Turkey, Kuwait, and Saudi Arabia fearing Saddam Hussein and wanting him removed.

Bush's gaffe clearly did not represent an attempt by the former president to acknowledge claims that the U.S. invasion of Iraq was "brutal" and "wholly unjustified."

Military personnel, at least 53 of whom were said to be seriously injured, have been evacuated from the Azovstal steel plant in Mariupol, Ukraine’s Defense Ministry said on May 16. (Credit: Zvezda News via Storyful)

Even so, many on Twitter poked fun at the former president.

"Oof. If you were George W. Bush, you think you’d just steer clear of giving any speech about one man launching a wholly unjustified and brutal invasion," former Rep. Justin Amash tweeted.

"This is the most amazing Freudian slip of all time," Townhall writer Scott Morefield tweeted.

"George W. Bush didn't do a Freudian slip. He did a Freudian Confession," John Fuelsgang, a comedian and broadcaster, wrote on Twitter. 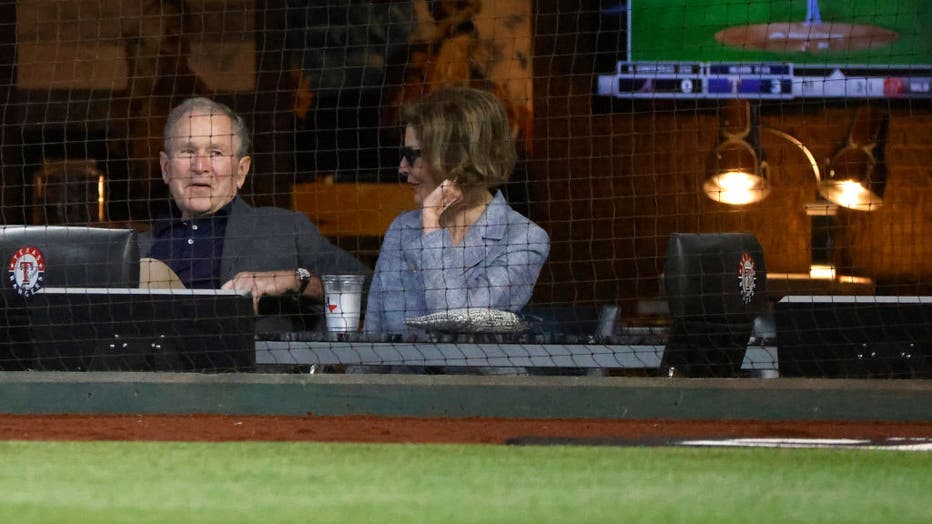 ARLINGTON, TX - MAY 1: Former President of the United States George W. Bush and wife Laura Bush watch the game between the Texas Rangers and Atlanta Braves during the third inning at Globe Life Field on May 1, 2022 in Arlington, Texas. (Photo by Ron

"The way countries conduct elections is indicative of how their leaders treat their own people, and how nations behave toward other nations," Bush said. "And nowhere is this on display more clearly than Ukraine.

Bush noted that Zelenskyy, whom he described as a "cool little guy," and "the Churchill of the 21st century" was empowered by electoral legitimacy before leading the defense of his country against the Russian invasion.