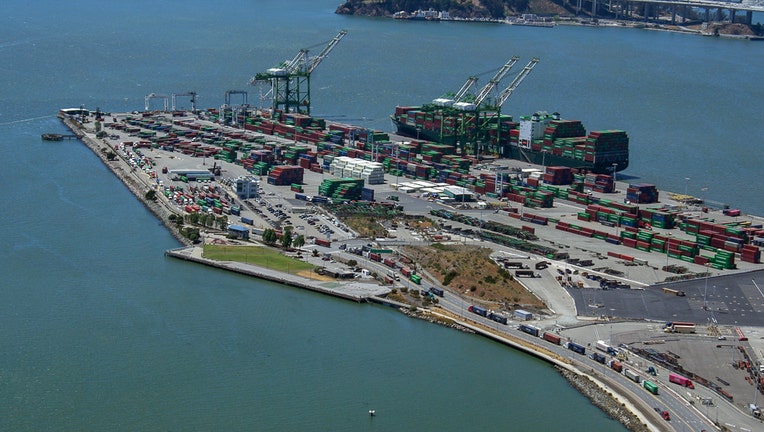 OAKLAND, Calif. - The Port of Oakland is set to receive a new, giant crane in the early morning hours Thursday via a 764-foot-long ship, the Zhen Hua 26 from China.

The ship, which initially anchored in Drakes Bay to prepare the crane, will sail under the Golden Gate Bridge around 5:30 a.m., with about 10 feet of clearance. The Zhen Hua 26 will then go under the Bay Bridge at approximately 6:15 a.m. before docking at the Ben E. Nutter Terminal in Oakland.

The Port says the arrival will be "visually dramatic," given that the crane is 300 feet high in its stowage position.

The San Francisco Bar Pilots, a maritime team that specializes in navigating giant ships into the Bay, will assist in the effort when the ship reaches a sandbar 11 miles west of the Golden Gate Bridge. Spokesperson Rachel Howard says Bay Area waters can be an especially challenging waterway, but the Bar Pilots have helped move ships larger than the Salesforce Tower past the area.

"This is what they do every day. Anytime you look out on the water and you see a ship in the Bay, that was brought in by a Bar Pilot," Howard said.

Everport Terminal Services purchased the crane in hopes of further innovating cargo operations at the terminal. Once it's reassembled and commissioned into service in two months, the crane will be able to lift cargo up to 170 feet.

"New container cranes help keep the Port of Oakland competitive so it can continue to attract and handle the largest vessels calling North America. Ultimately, infrastructure, like this new crane at Oakland's waterfront, contribute to growing the maritime business in Northern California and generating jobs in the region," the Port said in a news release.