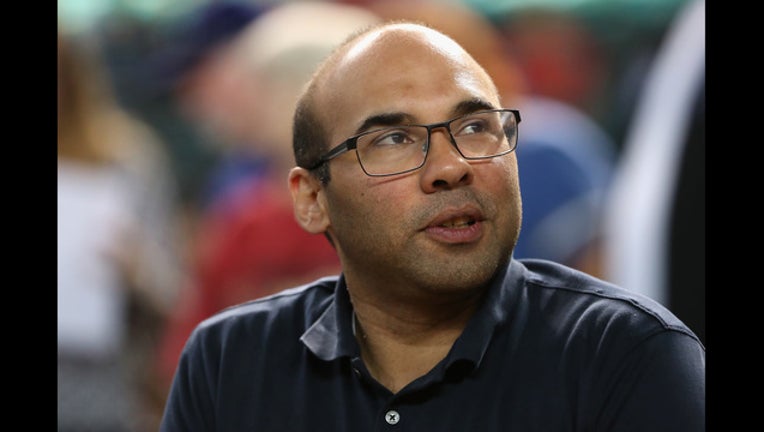 The Giants announced the hiring Tuesday night and planned a formal introduction at AT&T Park on Wednesday, a day before they hold a public celebration of life for late Hall of Famer Willie McCovey.

Baseball executives are meeting this week for the GM meetings in Carlsbad, California, and Giants CEO Larry Baer knew it might take this long to find the right person to push the department in a fresh direction.

Zaidi just completed his fourth year as GM for Los Angeles. His Dodgers won a sixth straight NL West title and lost in the World Series each of the past two seasons.

“We set out to find one of the best minds in baseball and Farhan’s many accomplishments and expertise exceeded our expectations,” Baer said. “Farhan is widely viewed as one of the top executives in our industry and we are thrilled to have him lead the next chapter of Giants baseball.”

In November 2014, the Canadian-born Zaidi departed his job as assistant GM of the Oakland Athletics to lead the Dodgers under Andrew Friedman. Zaidi earned his bachelor’s degree in economics from Massachusetts Institute of Technology in 1998 and a PhD in economics from the University of California at Berkeley in 2011.

So, Zaidi brings more of an analytical emphasis and strength. The Giants sought to upgrade their baseball operations department and take a “fresh approach,” as Baer put it.

“I am delighted to return to the Bay Area and to join one of the most storied franchises in the game,” said Zaidi, who turns 42 this coming Sunday. “I have watched the Giants from afar and I have great respect for the organization’s culture and many accomplishments. I am excited about this new opportunity and I’m looking forward to getting right to work.”

Zaidi is expected to have the flexibility to hire someone as GM under him. He spent 10 seasons with Oakland and received plenty of responsibility on Billy Beane’s staff, such as playing a key role in the acquisition of Cuban slugger Yoenis Cespedes before the 2012 season.

The Giants dismissed GM Bobby Evans in September. San Francisco — which won World Series championships in 2010, ’12 and ’14 — went 73-89 in 2018 and went a majors-worst 5-21 in September to miss the playoffs for a second straight year and third in four seasons.

With the A’s, Zaidi’s areas of expertise included providing statistical analysis for evaluating and targeting players in the amateur draft, free agent and trade markets. He also worked on arbitration cases, minor league contracts and worked closely with coaches to analyze data from advance scouting reports.

Zaidi previously served as business development associate for Small World Media, the fantasy sports division of The Sporting News, and also worked as a management consultant for the Boston Consulting Group.