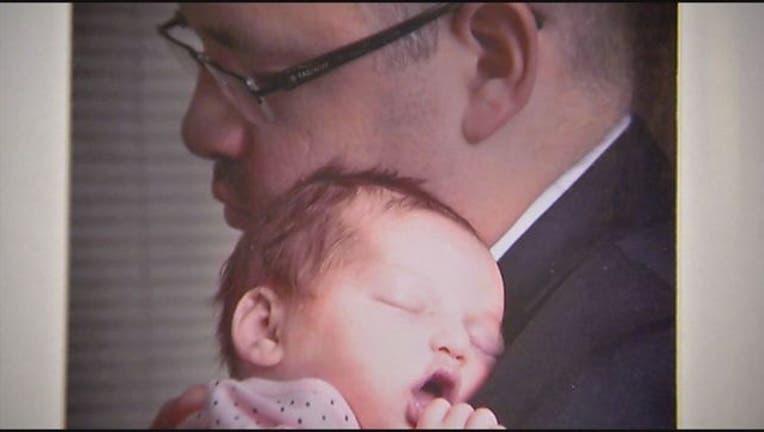 The birth of a child is one of the happiest in a parent's life.

Snapping lots of pictures to capture all those precious moments is part of the joy for many new moms and dads.

FOX 29's Dawn Timmeney took a look at a photo session that means more than most of us could ever imagine.

"This one is my absolute favorite. I Iove that one."

Adriane and Bob Gries live in Chalfont, a suburb 30 miles outside of Philadelphia. The married couple loves looking at pictures of their little Lizzy.

She was was born January 3rd, 2014, weighing six pounds and seven ounces.

"I mean it just makes me smile because she looks perfect," Adriane explained.

But these pictures, and a few precious memories of their little angel, are all the Gries' have.

They did not leave the hospital with their newborn baby girl.

Lizzy was born with hypoxic ischemic encephalopathy or HIE, a lack of oxygen to the brain, at, or near the time of birth.

The photographs they have, were taken by Manuyunk photographer Jim Griep in the hospital, right before, and after Lizzy was taken off life support.

Her parents said hello and goodbye all at the same time.

"We had to cram a lifetime into seven days and Jim allowed us to capture those milestones and those memories through pictures we wouldn't have been able to take," Adriane explained of the ordeal.

Jim is a volunteer photographer with the non-profit organization "Now I Lay Me Down to Sleep."

The organization gives families, who've just suffered the loss of their baby, a one-time chance to have professional pictures taken.

"Many times, I'll be photographing the mom and she'll just start breaking down crying saying this is the first time I actually held him," Jim said.

Jim admits it is difficult going into such a grief stricken situation.

But he knows it means everything to heartbroken parents.

"Those parents look at you with such appreciation and gratitude because you're giving them something they can take home with them because they know they are going to leave the hospital empty handed," he said.

In the Gries' case, Jim was on standby for several days, actually driving through an ice-storm to be at the hospital for Lizzy's baptism.

He then waited until she passed away to take more photos, without all the tubes, and IV's and beeping medical equipment that was keeping Lizzy Alive.

"It's a profile and she looks like she's sleeping on my shoulder, mouth open slightly and I'm just holding her," Bob said.

"That I give them a little piece of them to hold forever. That, I don't have the words to describe that," Jim explained.

Jim's wife Mary is the regional coordinator for "Now I Lay Me Down to Sleep."

She got involved after realizing the need for the service.

"I would hear him get the calls late at night from the NIC U nurse. There was one in particular where she said, 'Oh Thank God, you are the 6th number I've tried,'" Mary said.

The Philadelphia area chapter of "Now I Lay Me Down to Sleep" gets at least five to six calls a month, and knows many more parents are out there, going through this unthinkable loss.

That's why it is trying enlist more photographers to volunteer their time and give families this priceless gift during such a dire time in their life.

"I think it takes a special person with a big heart. All the sadness and tears, the sessions are natural. I just think it takes one talented photographer who wants to make a difference," Mary said.

The photos are a lasting tribute to a tiny life lost.

But they are also a memento that in some small way, helps with the healing process.