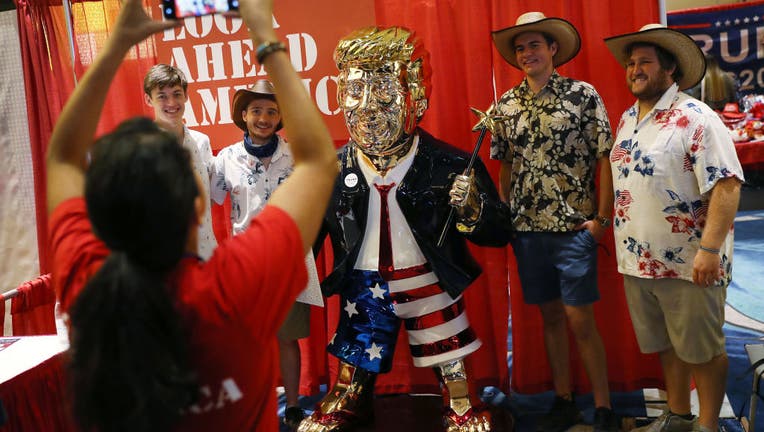 ORLANDO, Fla. - Former President Trump has not yet made his appearance at the Conservative Political Action Conference (CPAC), but a gold-colored statue in his likeness has already stolen the show.

People have been lining up to get photos next to the statue at The Hyatt Regency in Orlando, Florida.

The statue was made by Tommy Zegan. It was his second work after another statue of former Green Bay Packers star quarterback Brett Favre. Zegan’s next project will be a statue of Robin Williams as Popeye.

RELATED: Will Trump announce a presidential run in 2024 at CPAC?

Zegan said that throughout the Trump presidency, he saw so many signs, balloons, and statues of the 45th president painting him in a negative light, such as the "Baby Trump" balloon.

"Is this the best the art community can do?" queried Zegan. "So, I said I can do better."

According to Zegan, there is a lot of "symbolism" in the statue. The suit represents that Trump is a businessman, the red tie is symbolic of the Republican party. His red, white, and blue shorts show that "he is a patriot." He’s wearing sandals because "he’s of that age where he should be retired and out on the beach somewhere" but he’s not. The magic wand he’s holding harks back to a 2016 comment that former President Barack Obama made to Trump when he said, "What magic wand do you have?" to bring jobs back to the US. Lastly, he’s holding the constitution because "it’s something he believes in."

A few notable speakers made their appearances at the Conservative Political Action Conference on Saturday. Former Secretary of State Mike Pompeo defended his time in the Trump administration, lashing out at critics and China.

RELATED: Hyatt claps back at CPAC haters: We take pride in operating a highly inclusive environment

Zegan said he does not want the statue to represent an "idol" for people to worship. He wants everyone, even liberals, to laugh and pose for photos next to the figure.

This statue is actually the "mold" that was used to make the "real" statue, which is made of stainless steel and weighs 600 pounds. The artist hopes that the statue will end up in the Trump Presidential Library. This statue, which weighs 200 pounds, is for sale and Zegan is asking for $100,000. He received an offer of $80,000 but the offer was withdrawn due to the pandemic.

Tune in to FOX 35 Orlando for the latest headlines.